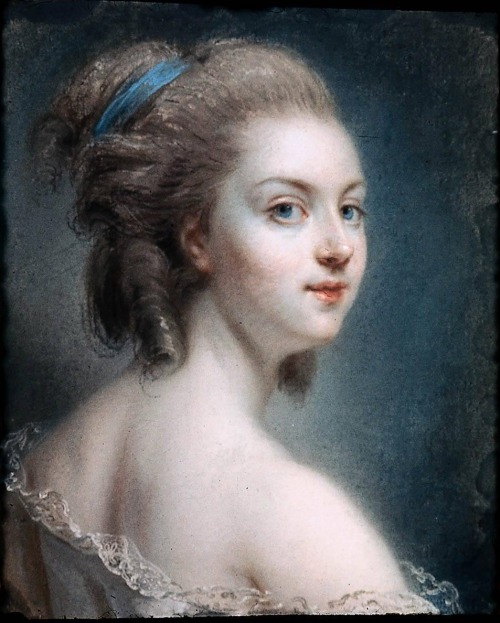 A bed warming companion of French kings and European nobility, she has been called “the first officially recorded dumb blonde.”Marylin Monroe didn’t invent the concept it was done 2 centuries ago by this royal whore ; Rosalie Duthé was a frequently-requested subject for portraits, including partial and full nudes, many of which still exist in museums and private collections.After quitting a French convent, Duthé became the mistress of wealthy English financier George Wyndham, 3rd Earl of Egremont, “whom she is said to have ruined.” She then became a dancer at the Paris Opera Ballet, and the companion to various noblemen, including the Duc de Durfort, the Marquis de Genlis, and the young Duc d’Artois, the future Charles X of France.

Catherine-Rosalie Gerard Duthé was apparently born to win the hearts of Europe’s elite. It is generally believed that she left a French convent as a teenager, though the reason for this is anyone’s guess. Some historians have indicated that Rosalie was born into a respectable family; her father had a “small job” at the royal palace. She was sent to the convent to be educated but was entrusted to her aunt after abandoning her lessons. This aunt, according to some versions of her life, in turn introduced her to two celebrated mistresses from the time of Louis XV, who taught Rosalie about the finer art of seduction and entertaining, as well as ways to get men to give her nice gifts and lots of money. At seventeen, Rosalie is said to have attracted the attention of an archbishop, Arthur Dillon, who pushed her into leaning how to sing and dance. She was apparently a very busy young woman at this time and also became the mistress of several other men, some of whom overlapped each other.

By her early twenties, Rosalie became a dancer at the Paris Opera Ballet. It was here that she began attracting the attention of wealthy and powerful suitors. In 18th century Paris, women who were actresses, dancers or opera singers were usually also prostitutes – albeit high-paid ones. Rosalie was marvelously beautiful, with striking blonde hair and a melodic laugh. But what really began to interest would-be patrons was a peculiar habit she adopted on stage: Rosalie would pause for an awkward length of time before speaking her lines. She did not do this every time, though soon her audiences began to think she was simply a bit dim-witted. Her odd habit was later turned into a one-act play, which was a huge success that “kept Paris laughing for weeks”, sealing Rosalie’s reputation as the first “dumb blonde.” Around the same time, Rosalie purportedly became the mistress of the English financier George Wyndham, 3rd Earl of Egremont, who, like his father, would visit Paris to collect French furniture. She caught his eye during one of her performances. George would have several mistresses throughout his lifetime (and more than 40 bastard children by them), though Rosalie was said to have been the one who “ruined” him (perhaps she was the mistress who started him down his path of debauchery?). Soon Rosalie became a much sought after companion, though her affairs were always brief. Her conquests included the Duc de Dufort, the Marquis de Genlis and the comte d’Artois, the future Charles X of France. Charles was probably her best catch, which heated up sometime in 1775 when Rosalie was nearing thirty. Infatuated by his new lover, Charles gave her a house in the classy area of Chaussée d’Antin in Paris, which was lavishly decorated and painted. In 1788, Rosalie had the honor of riding in Louis Philippe II, Duke of Orleans, carriage. Typically, this carriage was meant only for princes and soon young aristocrats began singing that La Duthé a dû téter, meaning roughly “The Duthé must have suckled royally.” The reason for her scandalous ride was simple: as a teenager some years prior, Rosalie had been summoned by Louis’ father to educate his fifteen-year-old son, later King Louis Philippe I, about sex after the father feared his son was a little too interested in men. According to one source, she was so good at her lessons that little Louis soon became an expert. When she was not entertaining men, Rosalie was a much sought after model for portrait painters (she was always willing to do partial or full nudity) and sculptors. Though many artists requested her, Rosalie’s favorite was Henri-Pierre Danloux. Rosalie quickly amassed quite a bit of wealth, which she was happy to flaunt. By 1800, Rosalie disappears from history just as quickly as she had appeared, her only true claim to fame being her presumed low intelligence and ability to sleep with powerful men. Some say Rosalie moved to England where she lived comfortably off the generous donations she had acquired for her “talents”. Back in France; however, her possessions were confiscated during the French Revolution. The year of death is recorded as occurring anywhere from 1820 to 1831, though she must have eventually returned to France (if she indeed ever left) in the very least to be buried at Père Lachaise Cemetery in Paris.