Eze is a medieval village perched like a nest of eagles on a narrow rocky peak overlooking the Mediterranean Sea. The old fortified village is still crowned with the ruins of its fortified castle of the twelfth century (demolished in 1706), sitting on a narrow rocky peak. The gardens of the castle house the famous Exotic Garden, and from the top (429 m) you will have a beautiful view of the coast (it will cost you however). The old village contrasts with the residential area of ​​Eze-sur-Mer, a seaside “town” located between Beaulieu-sur-Mer and Cap d’Ail. Eze-sur-Mer has beaches, water sports, cafes, restaurants and hotels. And a station.

The village of Eze, like Roquebrune-Cap-Martin, is a village curiously perched at the edge of the Mediterranean.

Lounging and relaxation in good form on the terrace of the castle of the golden goat. Relaxing morning before a hike this afternoon.

Forget the glitz of Monaco, Cannes and St Tropez, with their overpriced drinks and overhyped pebble beaches, spring is the time to head for the hills. The ancient village of Eze, with its fabulous views over St Jean-Cap Ferrat, is where the real appeal of the Côte d’Azur lies. By early summer the traffic along the Moyenne Corniche – the coastal road between Nice and Menton – chokes up, but around easter the flights are more reasonable, and the crowds more manageable.
Perched on rock 1,400 feet above sea level, the village centres on the ruins of a 12th-century castle – a testament to centuries of occupation, from Romans and Moors to the House of Savoy. Wandering through its labyrinthine streets, admiring the view over the vast, bougainvillea-wrapped villas that lead down the hillside to the Mediterranean, you will soon realise why each summer brings an invasion of a different kind. 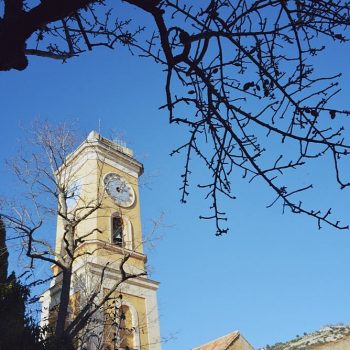 Continue, then, towards the garden of Eze. It is the jewel of the village as much by the floral compositions that it shelters as by the panorama which it proposes.

Indeed, the garden of Eze allows to walk in a luxuriant vegetation decorated, here and there, by sculptures of Jean-Philippe Richard. It is even possible to relax on strange wooden lounge chairs offering an exceptional view of the coast. But if you climb to the top of the terrace, the view will be even more extraordinary! At this place, you can even see Corsica!

You can also admire some remains of the old fortress. Then descend to the bottom of the old village and finish your visit with a stroll on the trail Friedrich Nietzsche. If you wish, you can go down to Eze-Bord-de-Mer in 45 minutes. However, we must provide good hiking shoes because the slope is difficult.

The church of Eze

Open from 9am to 6pm. Possibility of guided tour. Inquire at the Tourist Office. Note: photographs are prohibited inside the building.

Chapel of the White Penitents

Open from 9am to 6 pm. Possibility of guided tour. Inquire at the Tourist Office.

The garden of Eze

What is cooler than an exotic garden in the ruins of a medieval fortress? Welcome to Eze on the Cote d’Azur.

Open in July and August from 9am to 8pm.

Open from February to May from 9am to 6pm.

Open in June and September – October from 9am to 7pm. Open from November to January from 9am to 5pm

The reason that the views are so amazing from any vantage point in Eze is because the village is located on a hilltop of a high cliff about 1,400 feet above the sea level of the Mediterranean Sea underneath it. Everywhere you are surrounded by unbelievable views:
But it’s not only the views that capture your eyes, as you’re walking the streets. The village has been built as a fortified stronghold during Medieval period, and the beautiful architecture reflects that.
The structures here are several hundred years old, and the oldest building in Eze is this beautiful chapel: Chapelle de la Sainte Croix built back in 1300’s.
Places like this remind me that I should enjoy every moment of life and creation, and not waste life on negativity, because everything around us is really nothing short of a miracle. No amount of money in the world can recreate this majestically blue water in the quantities that we have it on Earth. Makes me really appreciate our Planet and the gift of life.