Succeeding his two brothers, Louis XVI and Louis XVIII, he is the oldest King of France, at his advent (66 years) as at his death (79 years). Attached to the conceptions and values ​​of the Ancien Régime without being as reactionary as it has often been said, he tried to embody the continuity of the State and the monarchy after the violent revolutionary passage, while accepting the majority the values ​​of his time. Very pious, it seems that Charles X attached a certain importance to the social condition of his people. Popular among the peasants of the province, who had badly experienced the First Republic (royalist insurrections), Charles was on the contrary mocked by the Parisians (often Republicans and Robespierrists); already perceptible under the Ancien Régime, the rupture between the capital and the monarchy is definitely consumed. 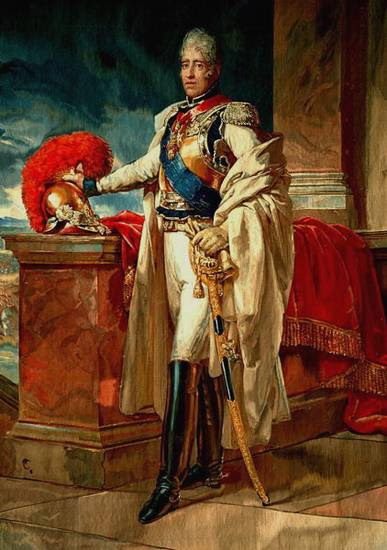 Sacred in 1825, he  was overthrown in 1830 by a new popular revolution that forced it to exile.
In exile, Charles X carries the title of courtesy of “Count of Ponthieu”, name of locality which will be given to a street of Paris. The deposed king first retreats to Holyrood Palace, Scotland. Thanks to his good relations with the Habsbourg-Lorraine dynasty, he moved to Prague Castle, where he received visits from Chateaubriand. He then leaves for Budweis then has to flee a cholera epidemic and finally reaches Göritz (Slovenia).
He died because of cholera  in this  town on November 6, 1836 and was buried in Kostanjevica (Nova Gorica, Slovenia

Elisabeth of Austria was born on July 5, 1554 in Vienna, at the court of her father Maximilian II. During her childhood, she lives next to Vienna with her older sister, Anne, and her younger brother Matthias. She was her father’s favorite because she looked like him physically,form, character and intellectually.

Wedding:
Several unsuccessful projects are first envisaged by the Austrian crown to unite Elizabeth to Frederick II of Denmark or Sebastian of Portugal. The offer of alliance with the King of France is seriously considered only from 1569. In the context of the roaring wars of religion, the French crown needed a Catholic marriage that strengthened its catholicity and who cemented his alliance with the Empire against Spain and England.
Originally, Catherine de Medici, mother of Charles IX wants to marry his son Anne, Elizabeth’s eldest sister, but the latter is finally attributed to his uncle King Philip II of Spain. Elizabeth will marry four-year-old Charles her eldest. She is sixteen, he is twenty. The wedding was celebrated in Mezieres, a city of Champagne located at the border.
Elizabeth is first married by proxy on October 22, 1570 at Speyer Cathedral, Germany; his uncle Archduke Ferdinand fictitiously serves as a husband during the ceremony. On November 4, Elizabeth leaves the lands of the Empire accompanied by a large escort led by the Archbishop-Elector of Trier. On the French territory, her journey is delayed by the rain which made the roads impassable. On November 24, she was received in Sedan by the two brothers of the king at the head of a large delegation of high nobility. Mézières, where the courtyard is located, is  about twenty kilometers from the fortress of Sedan; Curious to see his future wife, the king went there dressed as a soldier, incognito, to observe his bride as she walked with her brother Henri: he returned to Mezieres very satisfied with her  appearance.
Charles IX and Elizabeth are officially married on November 26, 1570; the ceremony is celebrated at the church of Mézières by the Cardinal de Bourbon. The bride is dressed in a silver cloth gown, studded with pearls, and a large purple cloak with  golden fleurs de lys. She wears an imperial crown, adorned with large diamonds, rubies and emeralds. The festivities last several days.
March 25, 1571, she is sacred to Saint-Denis in the tradition of the coronation of the queens of France. Her Happy Entrance to Paris, March 29, is one of grandeur

Queen of France:
At the beginning of her life as a couple, her husband gives her affection. When she catches a bronchitis in January 1571, he stays close to her and brings him jugglers to distract her. He takes her to the fair of Saint-Germain when she feels better. She is not very playful, while her husband loves to play. She had difficulty speaking French and had to go to one of the ladies in her suite, the Countess d’Arenberg. Then, the king moves away from her after the birth of their daughter, for hunting, leaving her mother Catherine de Medici to take care of politics for three years. Even so, when the king gets sick, she stays near him, praying and crying. And her husband Charles IX, 20 years old, a psychologically fragile man, retains however the connection he had before his marriage with Marie Touchet (which he will have a son Charles de Valois-Auvergne, Duke of Angoulême in 1573).
She gives her husband a daughter, Marie-Elisabeth (1572-1578), but no son. This girl will die and Elizabeth writes this Lament. She loved playing her role as a mother. 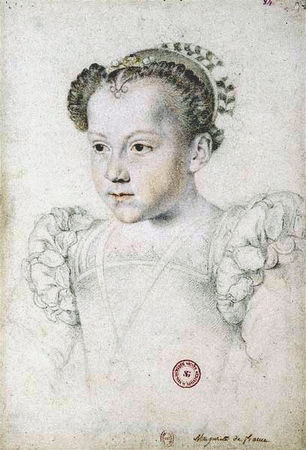 Court Life
Elizabeth remains only three years at the Court, but she leaves good impression and  memories, because of her sweetness,her  beauty andgoodness. Very reserved, she speaks like most members of the House of Habsburg German, Spanish, Latin and Italian, but not French. Thus she can communicate only thanks to one of her ladies who serves as translator, the Countess d’Arenberg. She wrote religious poems and memoirs about the history of her time. Her virtues are edifying: the famous Brantôme praises it. He calls Elizabeth one of the best, the sweetest, the wisest, and the most virtuous queen who reigned since the reign of all kings. Charles IX himself will make the compliments stating she is  the most wise and virtuous woman, not from France and Europe but from all over the world.

Nevertheless, she remains one of the least known queens of the Renaissance. Befriending her sister-in-law, the Queen of Navarre Marguerite de France, she found in her a confidante. They will correspond even after the return of Elizabeth to her native country (1576). When the latter learns that Marguerite is without income, she generously yields half of her dower.
Deeply marked by the tragedy of St. Bartholomew, Charles IX saw his health deteriorate quickly before dying prematurely in 1574.
After the death of her husband in 1574, she is determined to return to Vienna (the queen had no son for the crown). She bids farewell to her daughter Marie-Elisabeth de France that she will never see again. Then she leaves Paris in early December 1575. She settles again in Vienna, where she will correspond with her sister-in-law, Marguerite de Navarre. But the former Queen of France is still young, she is only twenty-one years old. She founded a monastery of Poor Clares near Vienna and the Church of All Saints in Prague. While continuing to endow churches and the poor. Nourishing also of her beneficence, Vienna.She got proposition to remarry several times, for example with Henry III or Philip II of Spain but she will not agree to remarry. She will not leave the mourning of her husband Charles IX.
Elizabeth founded a convent of Poor Clares, near which she would settle in Vienna. She died there in 1592, at the age of 37, in the greatest devotion.