My last shows for this year haute couture Spring/Summer collections as I’m heading to Los Angeles for the Grammys. But what an enchanting moment!

This year collections were more than top quality: feminine with purpose and skills.  Blogging about them was a great pleasure and once again I thank all the people that believed in me and my writing .

These are my favorite.

A hit girl and actresses favorite, this time the italian couturier decided to surprises us all with a presentation and not a runway show for his haute couture SS20 presentation. Inside the Galerie du Jeu de Paume , near the Tuileries, such an important place in French History for it is where on June 20 1789, the third state decide to  “not to separate and to reassemble wherever circumstances require, until the constitution of the kingdom is established”. It was a pivotal event in the French Revolution.  So Valli also made his historical fashion statement there. 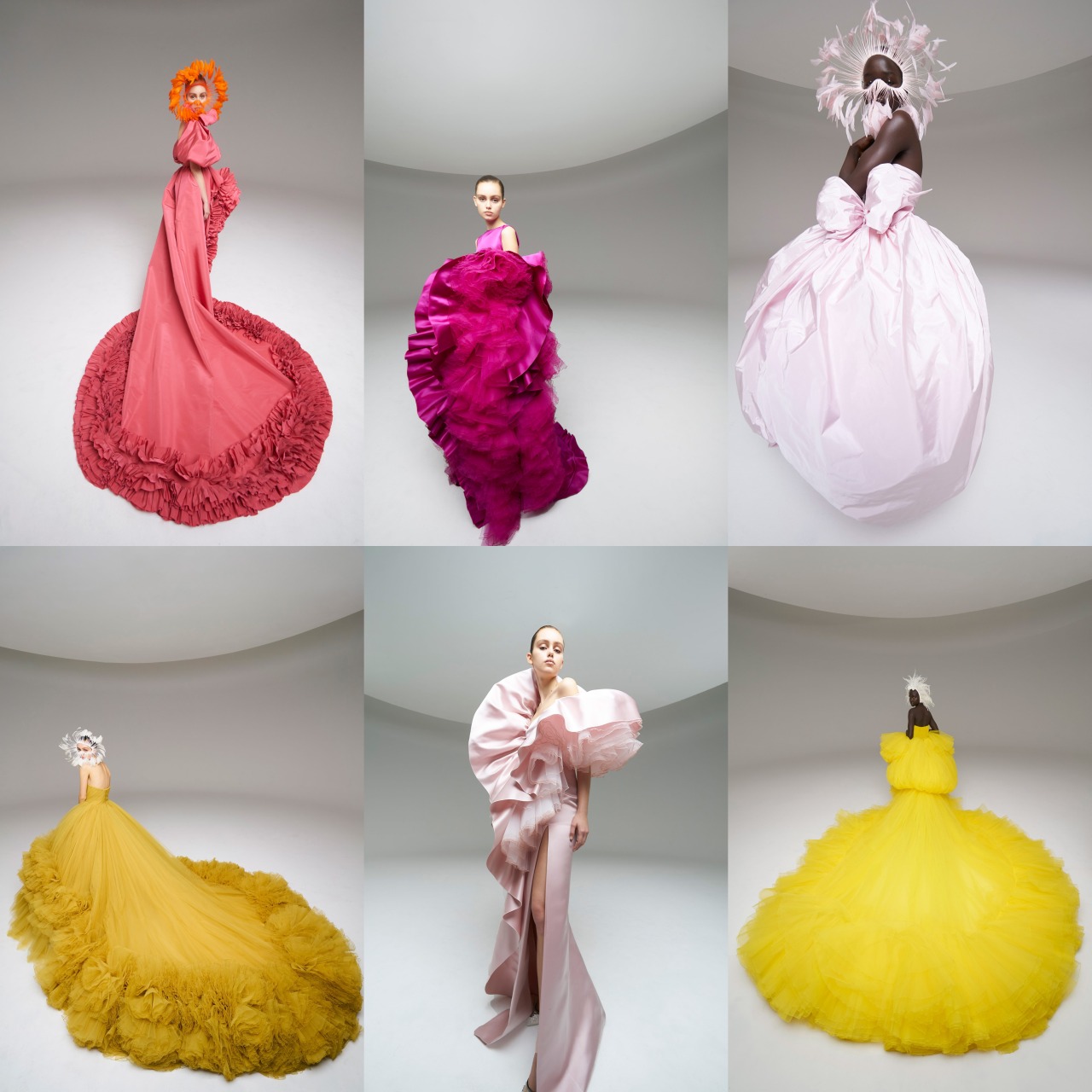 He also was a visionary deciding to open up to the public his exhibition instead of the exclusive and seculed atmosphere round fashion shows. With the longest strike to date in France , complicating an already tight and crazy schedule, it proves to be a very clever move. Walking among the audience, it was the perfect moment to interact with the designer. No flesh models, but beautifully illuminated mannequins. Spring colors, flowery drapés and creations, to breath of fresh air and real eye enjoyment. Very Monet gardens’ like.

Thanks so much for this one moment in time filling up our heads and hearts with good vibrations . We went out in high and good spirit. Madonna was so right: Italians Do It Better”

I cannot express my awe. As always I’m blown away

#FTMRunway / This is what we call a dream gown! ✨ @ElieSaabWorld spring/summer 2020 haute couture show in Paris. 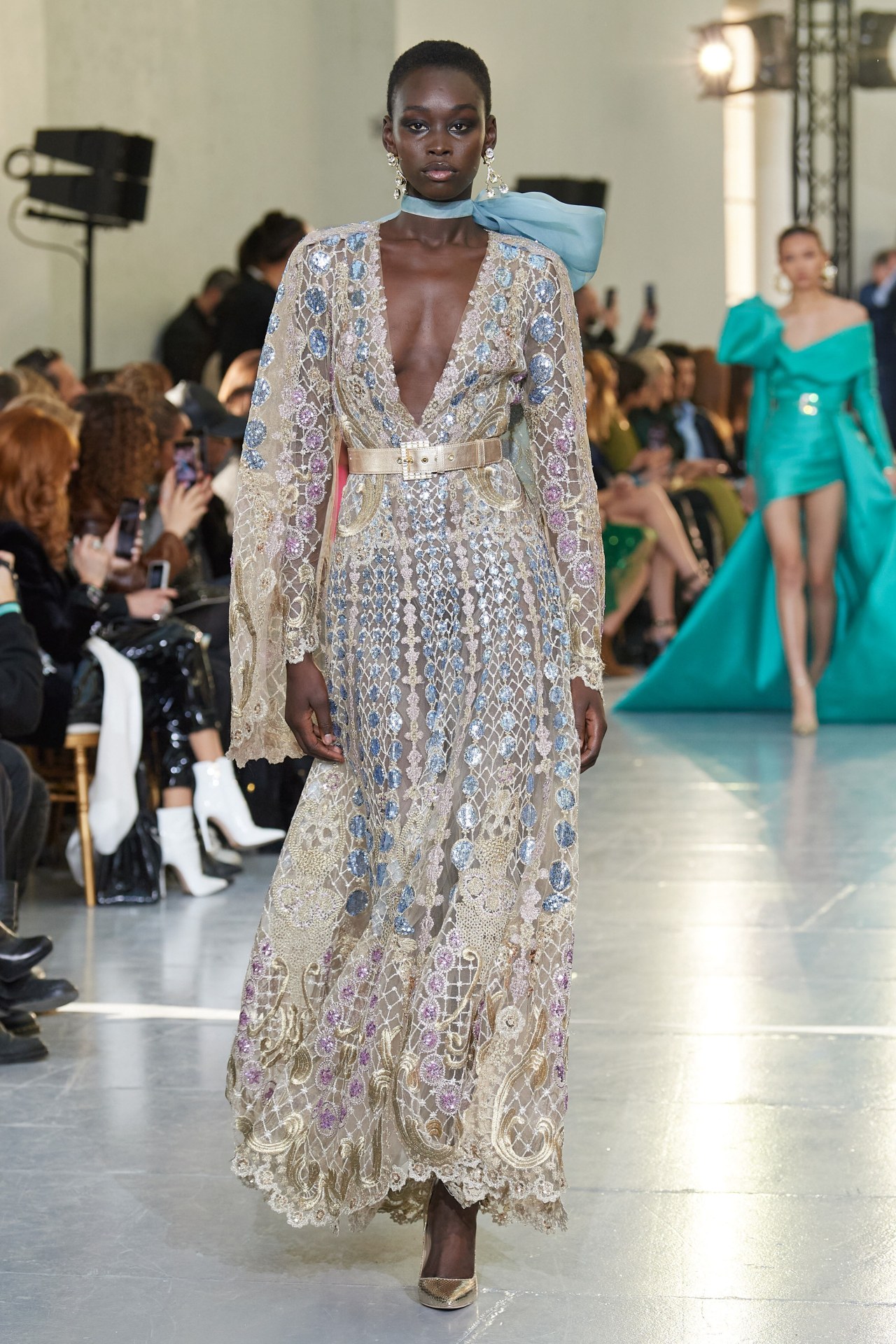 I’m such a fan of her style, creativity and so very organic sense of fashion.  The way she sets a connection between nature ( her shell shaped dresses) with the hypest graphism always so colorful with dreamy and catchy colors. Each details is poetry. She creates endless masterpieces each time.  But also a conscious claim for our planet : to clean and care for the oceans and all the flora living in.

This collection is named hypnosis for a reason. In Greek Mythology Hypnos son of Nyx ( the Night itself) is the God of sleep twin brother of Thanathos ( Painless death)  ans that says it all. Her clothing can transform any woman into a goddess , a very powerful one, but also preventing us fromm keeping on falling asleep hypnotized by the lies of the politics for they are leading us to a certain death 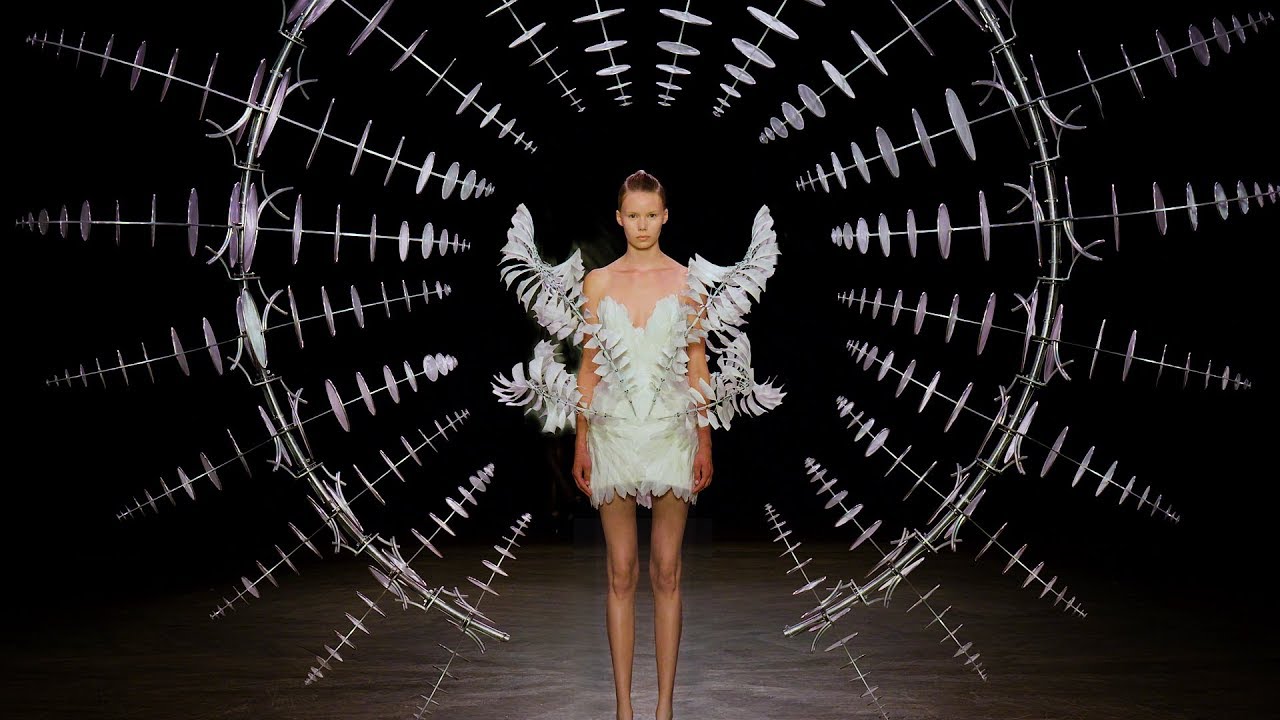 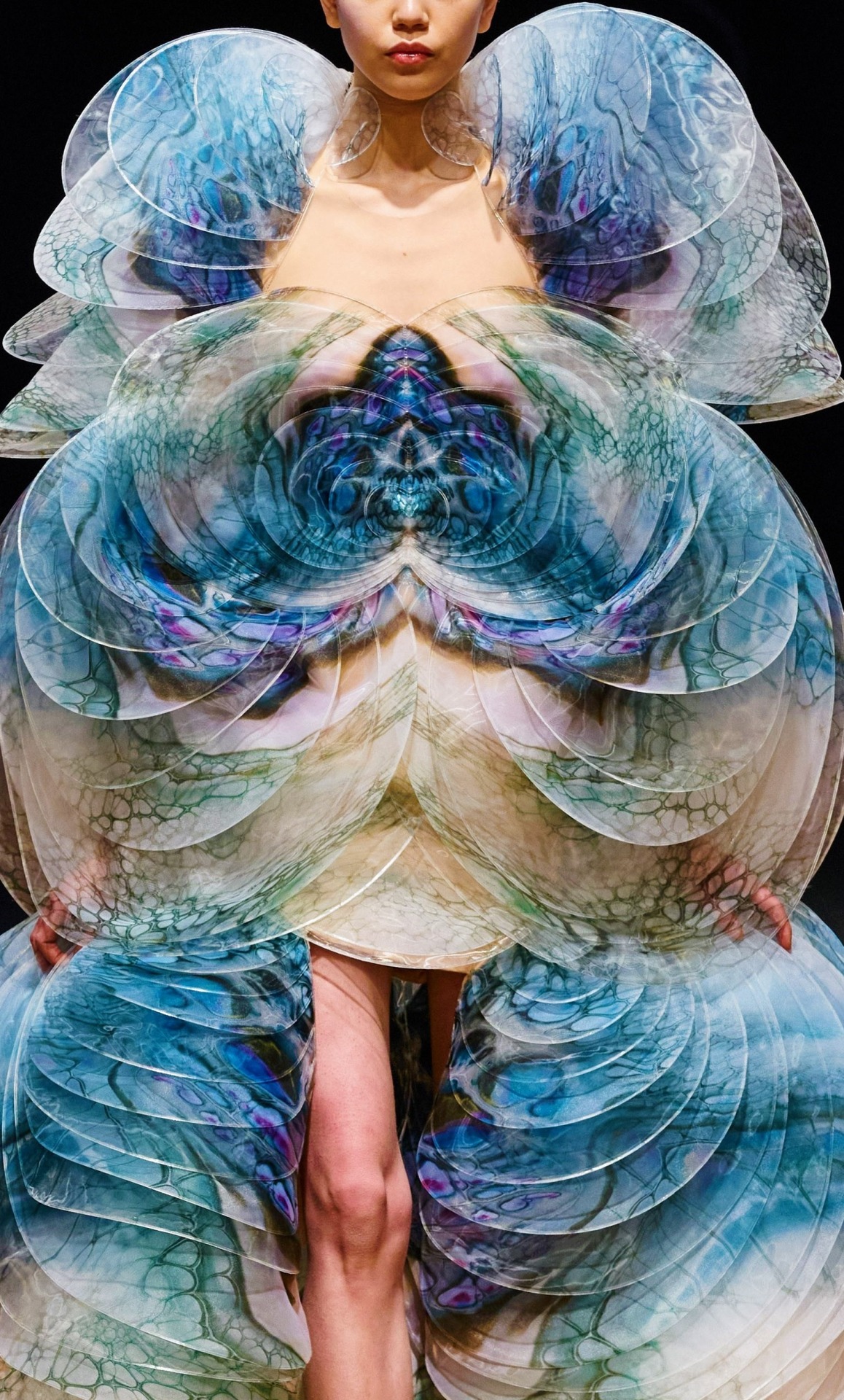 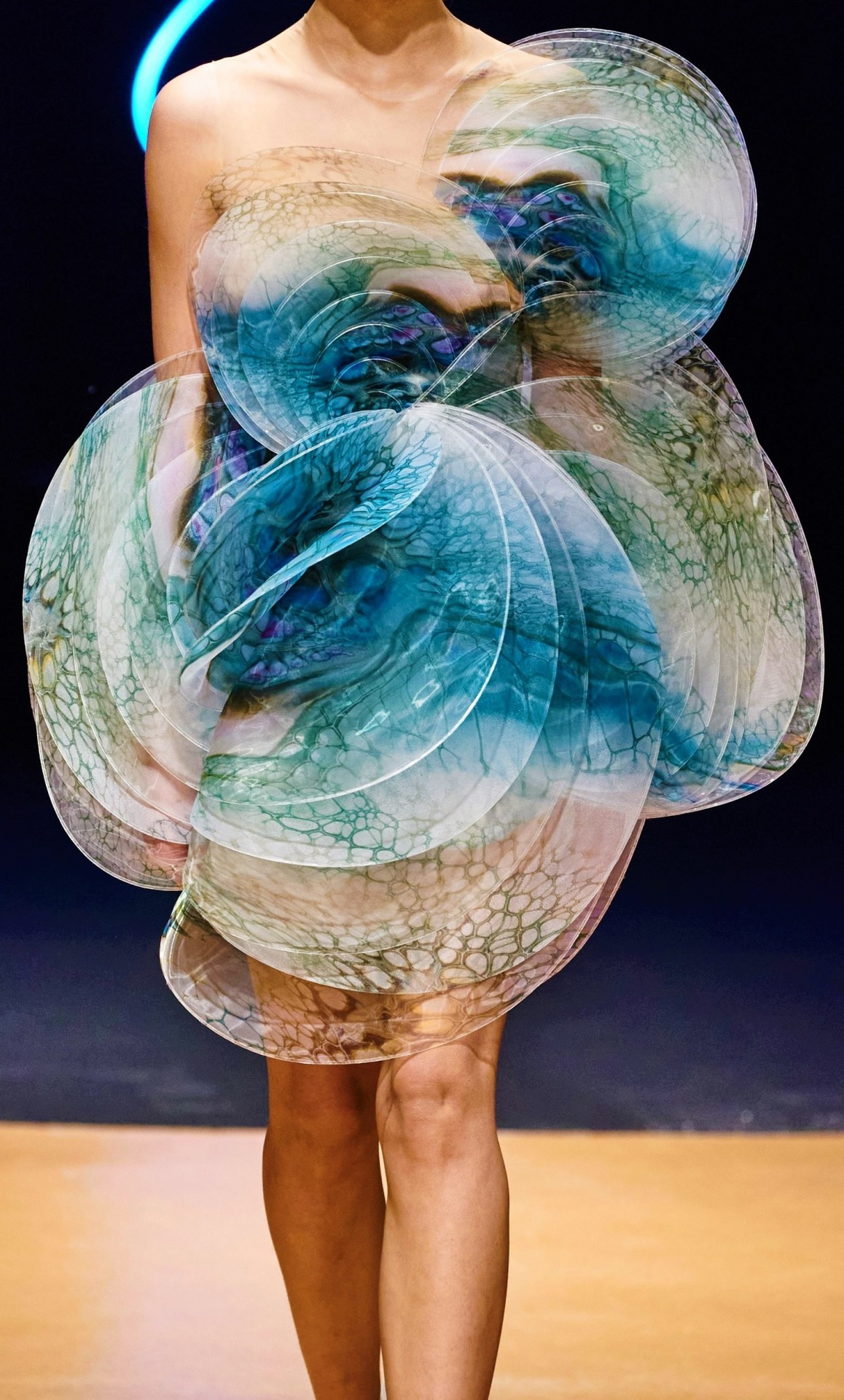 The ” Enfant terrible de la mode” had chosen the Théâtre du Châtelet to say goodbye to the fashion world after 50 years of audacity an iconic fashion statements. The perfect place for the visual pleasures we were to witness tonight. The show started with the trailer from ” Who are you Polly Magoo” a founding piece of Gaultier work and art. Each invitee received a note explaining the show as well as the designer reason to quit, though his fashion brands of course lives on.

The notes from “Back to black”  of the late Amy Winehouse are heard inside a darkened theater then Culture Club’s leader , the ever so edgy Boy Georges sets the festivities open , singing the song while emerging from a coffin held by 8 men appears Issa Linh. Quite a strong metaphora that for Gaultier Haute Couture is dead. 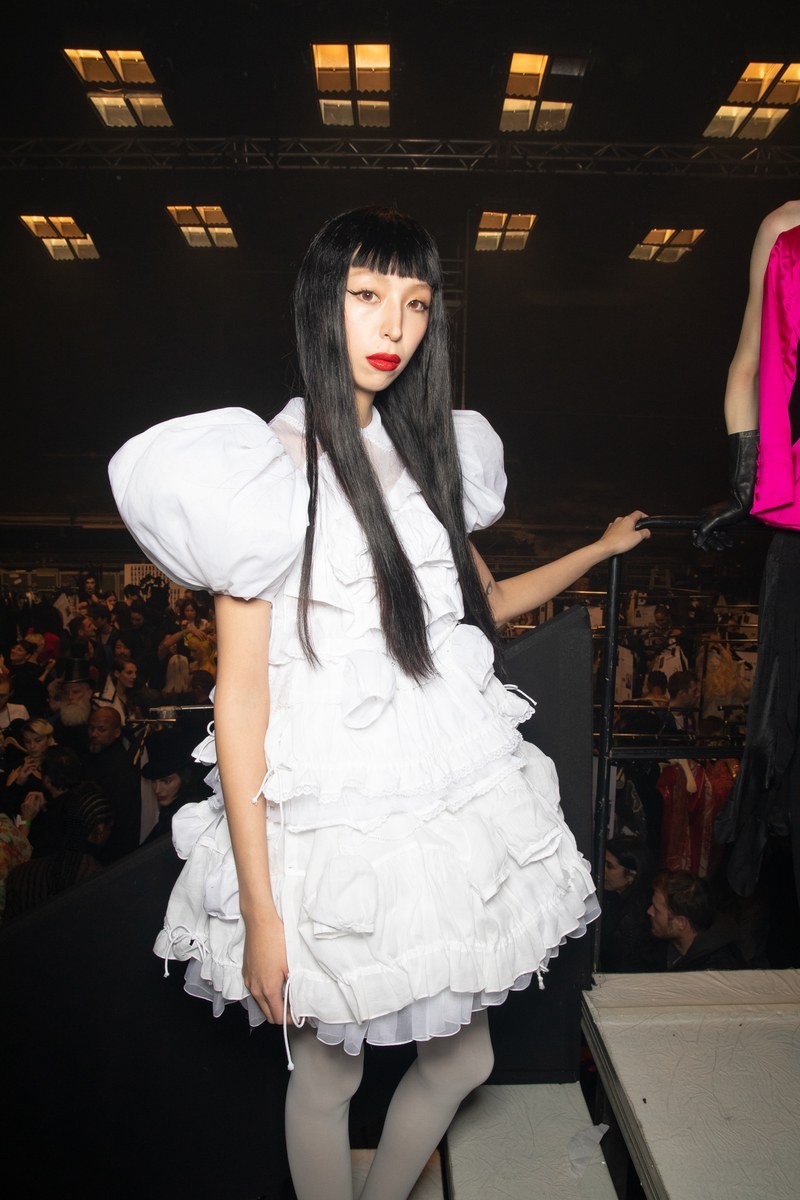 And here we go for an hour of fashion lesson. The designer revisiting his most iconic clothes : the corset, Striped stripes, kilt , Conical breasts, Multi-ethnic fashion etc.. 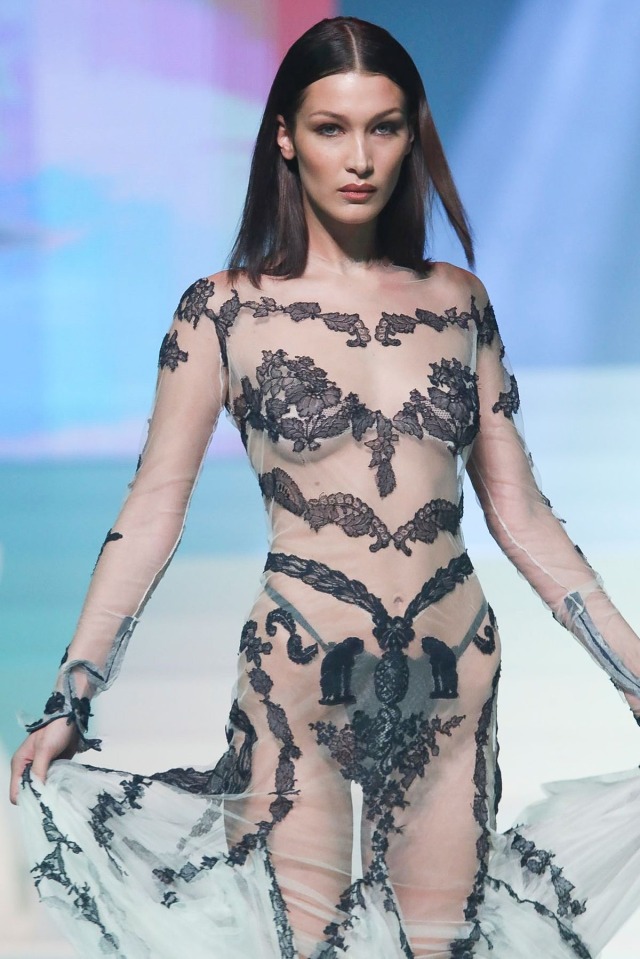 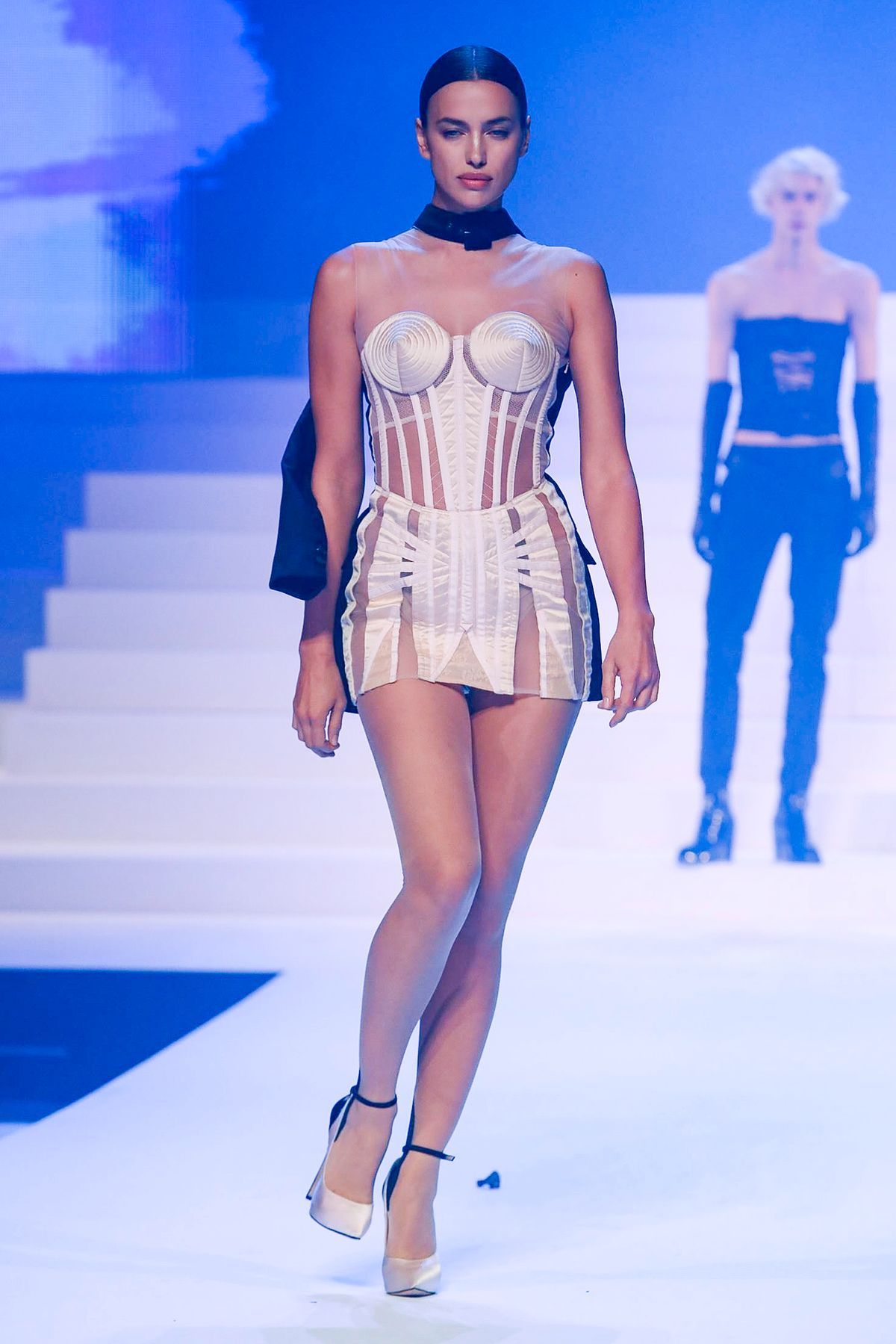 Then French singer Catherine Ringer brings back the Parisian titi feeling with her song ” Les Amants ( the Lovers)” while the marinière is shown. 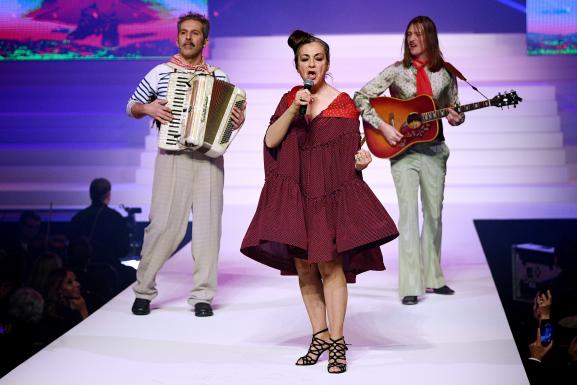 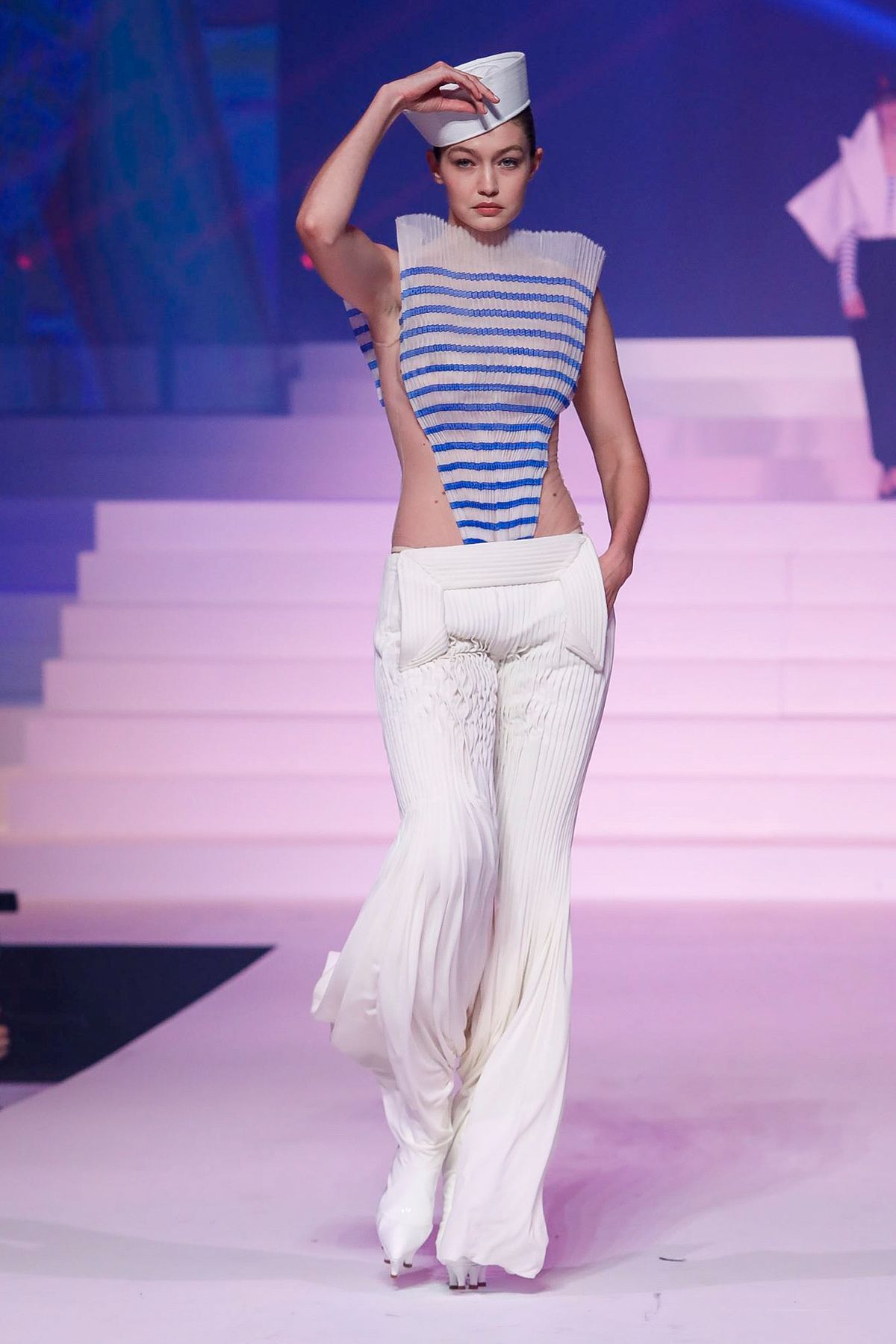 The shoes seems very uncomfortable, many models stumbled , they stroke exaggerated poses  but it was crazy, young, fresh, French and oh so Gaultier. 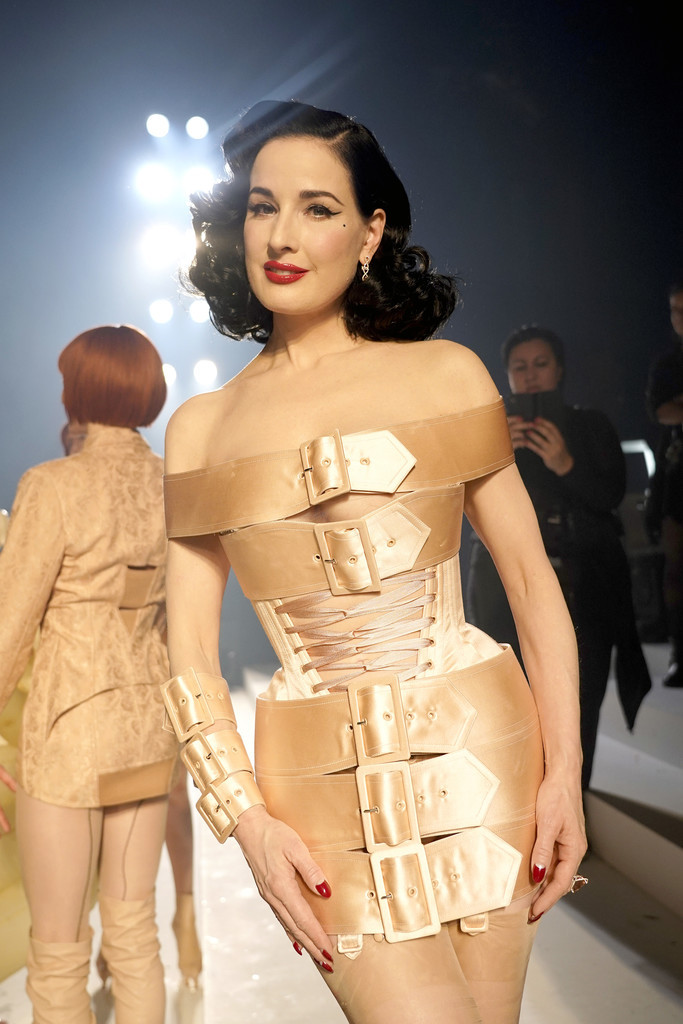 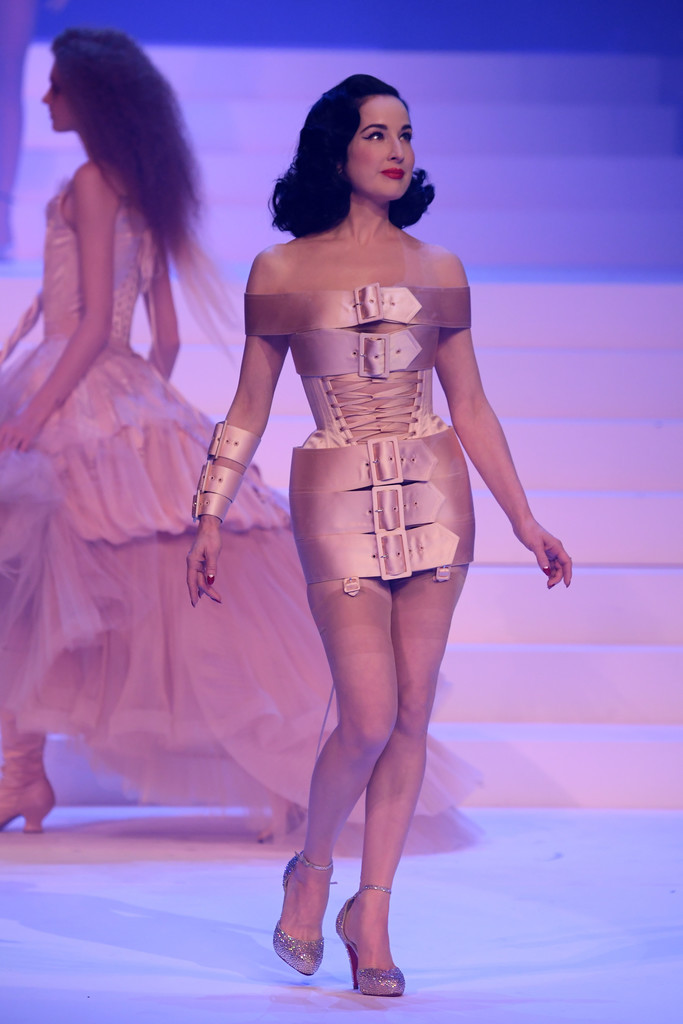 It was over the top !! I so liked it because in the end we hear it from the boy with Boy George closing the show. 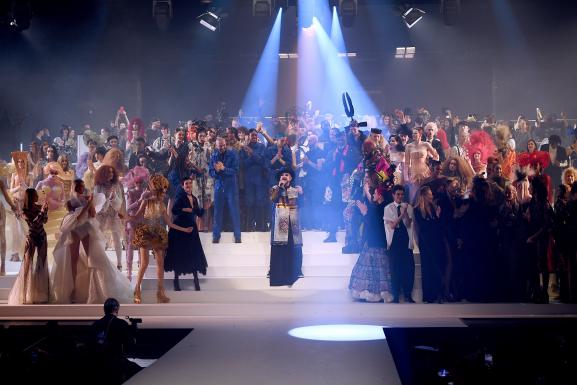 Sotheby’s headquaters in Paris were the place du Roi for this magnificent fashion show. Age is nothing but a number and talent is not measured by age for sure. The french couture rising star really embodies this spirit. Once again his collection is perfect, flawless. Primary colors black and white for an ode to femininity. As always I should say. What I especially like is that he magnifies bodies, not matter the figure, his clothing always manage to make you look sharp, sexy, strong and in control.

This i certainly why after learning from some of the most tailor-cut focused designers ( Ungaro and Nina Ricci) he got to work for Dior with Galiano  then Heidi Slimane, before heading to Saint Laurent. In 2005 he launches his own brand with his signature syle : the tie-bow creating himself his ever growing fan base for his perfect mix of masculine-feminine as St Laurent did back in the days 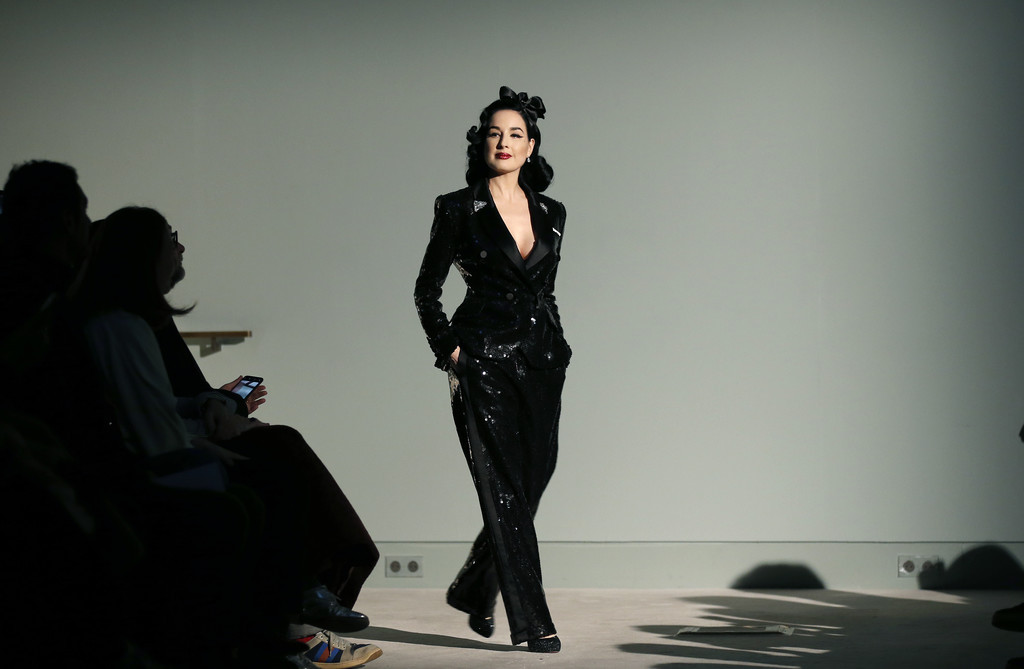 After being a guest member of the Haute Couture Syndical Chamber in 2008, Mabille received the official designation of Haute Couture in December 2012 and was decorated with the badge of Knight of Arts and Letters at the Ministry of Culture in June 2015 . 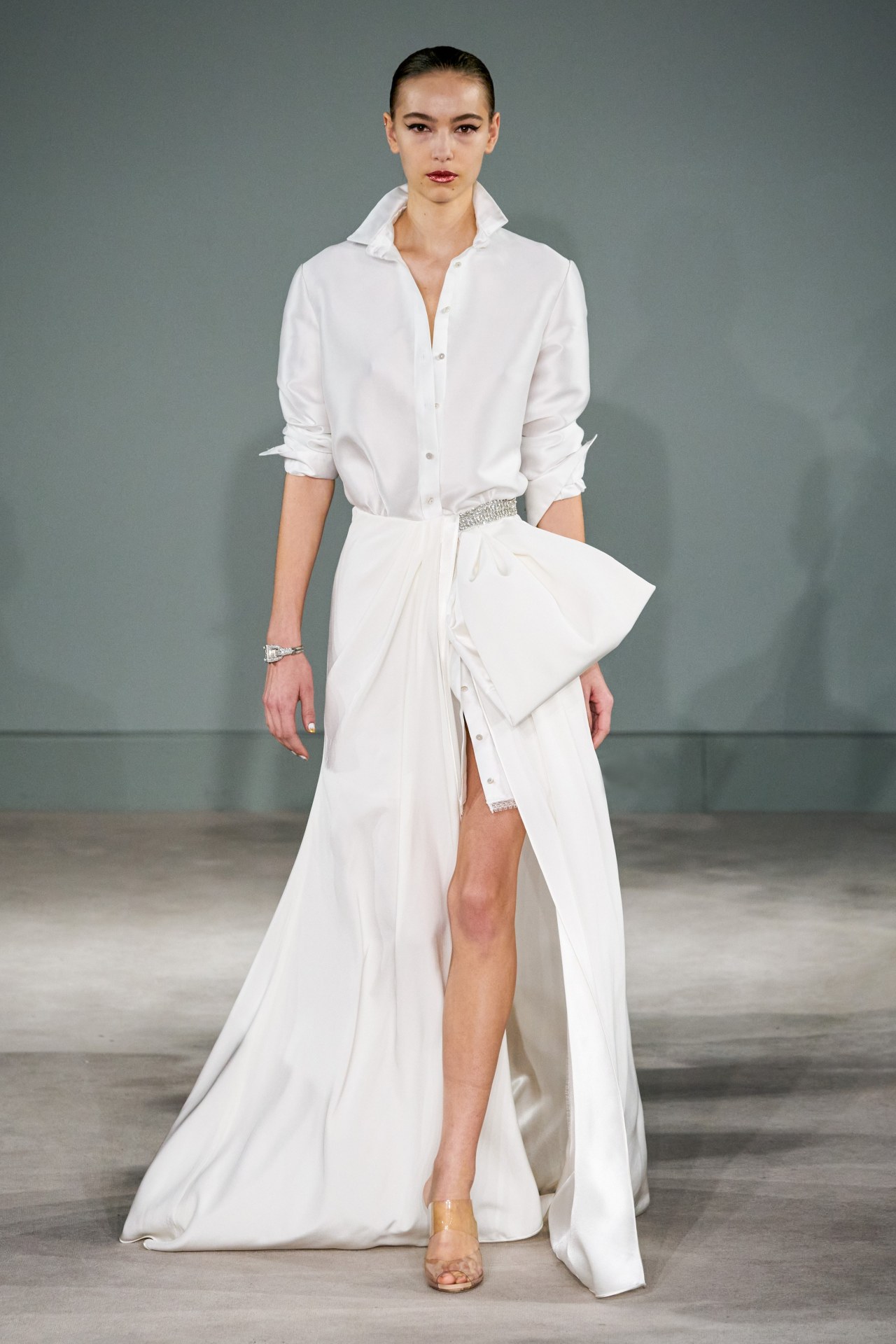 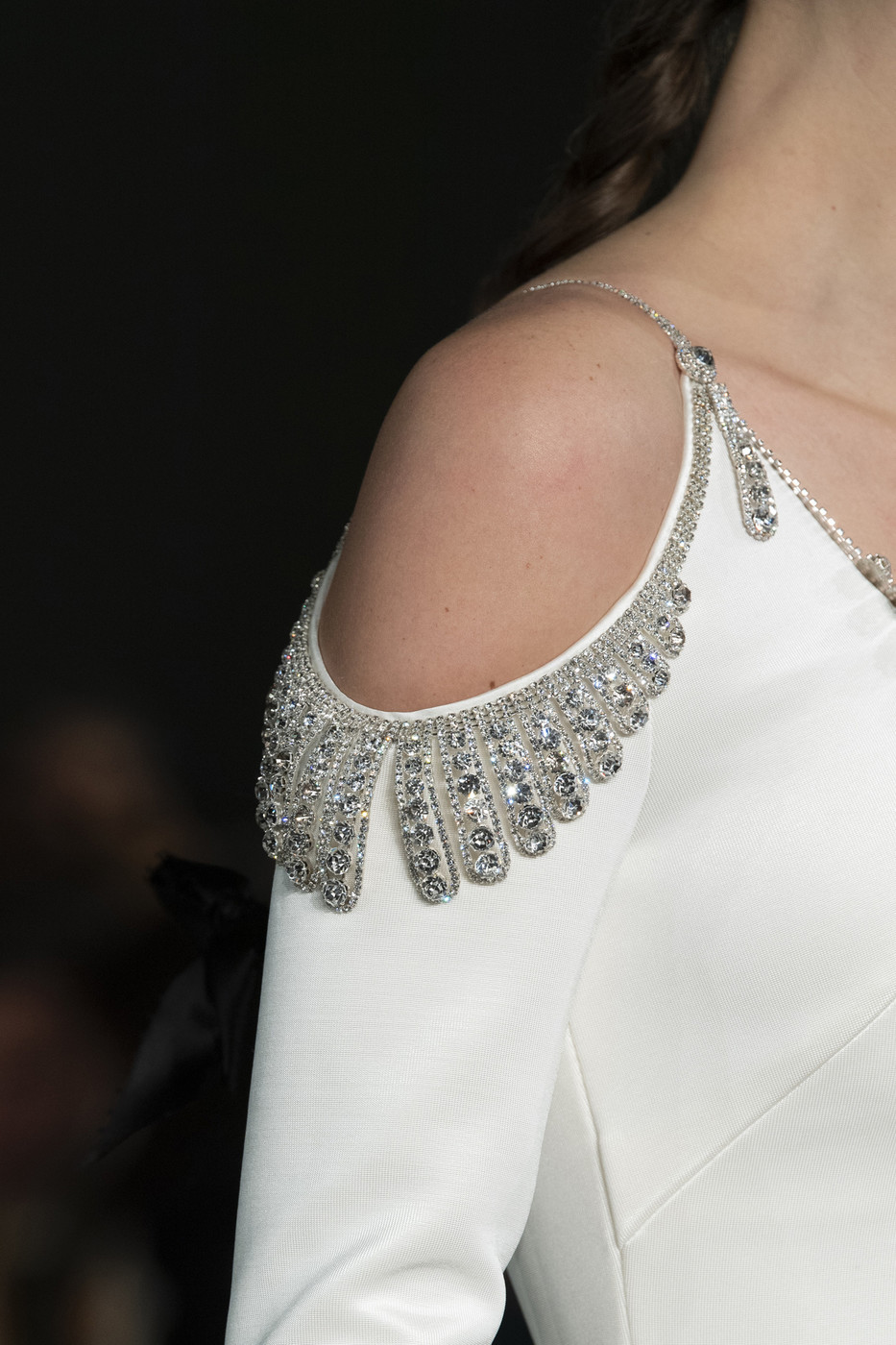 Another one of my all time favorite designers. Until 2015, she was not known outside of her native China clothing business woman and celebrities there. Then everything changed  when she was asked to create the martial arts costume for the 2008  Olympic Games catching the eye of foreign celebrities. Her rise to international  fame arrived in 2015 with the magnificent yellow  , very Ming Dynasty /Forbidden city of a  dress singer Rihanna wore for the Met Gala.  Since then many people fell in love with her  very documented and well constructed universe of embroidery and designs. 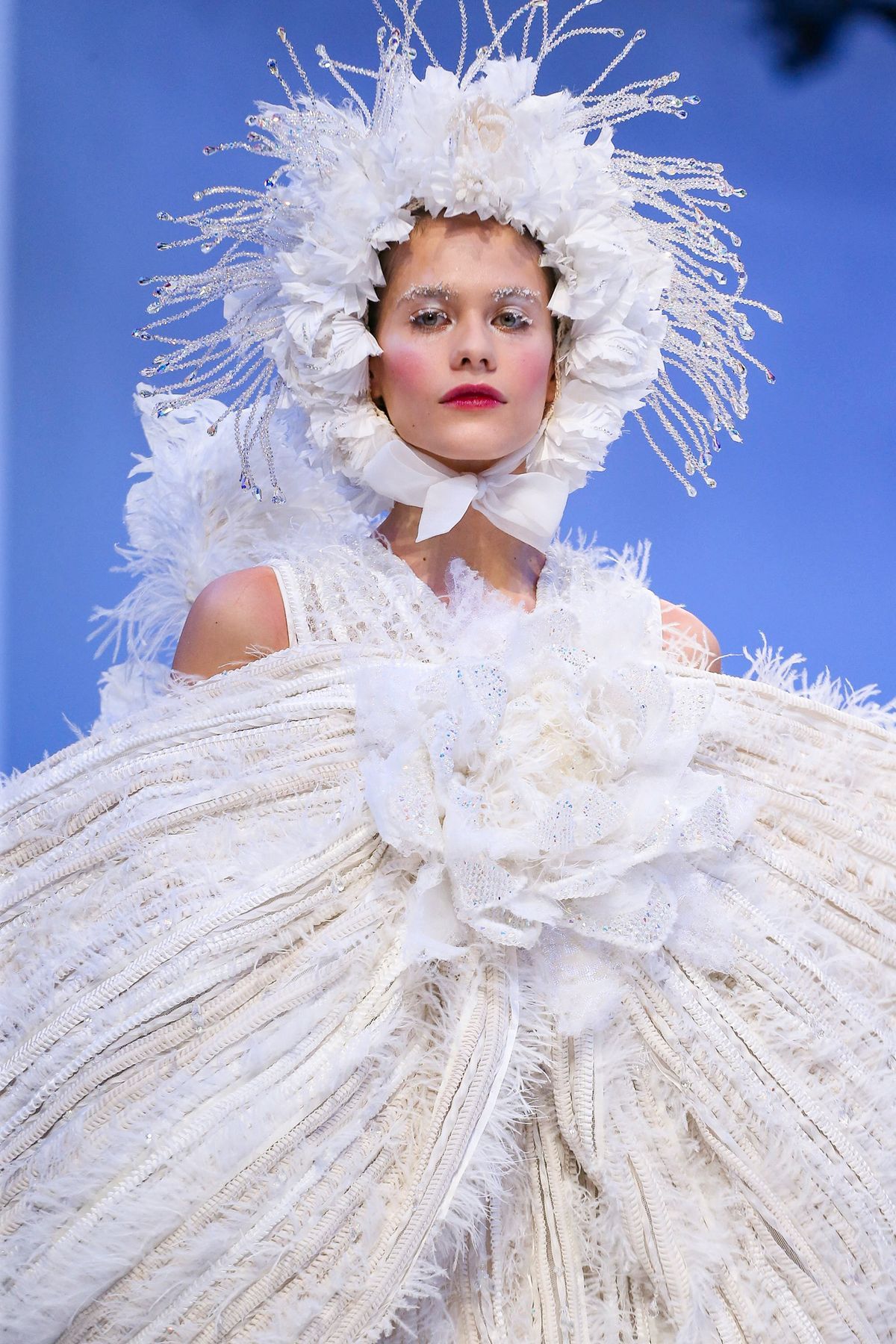 This collection is another time the perfect expression of spirituality as a reference and reverence to the Himalayas and their sherpas. Natural separation between China and Tibet. Though there is no political statement of any sort , this collection is nevertheless an allegory inciting people to go beyond their limitations, try to spaces, test themselves and no be limited by hat we know see, hear or more precisely what we think we know , see, or hear. Nature is the best therapist and getting lost in the great big white is a cathartic.

Fashion is an art for sure and wen the intention behind is to make people question themselves or reach to them even on an unconscious level is pure poetry.