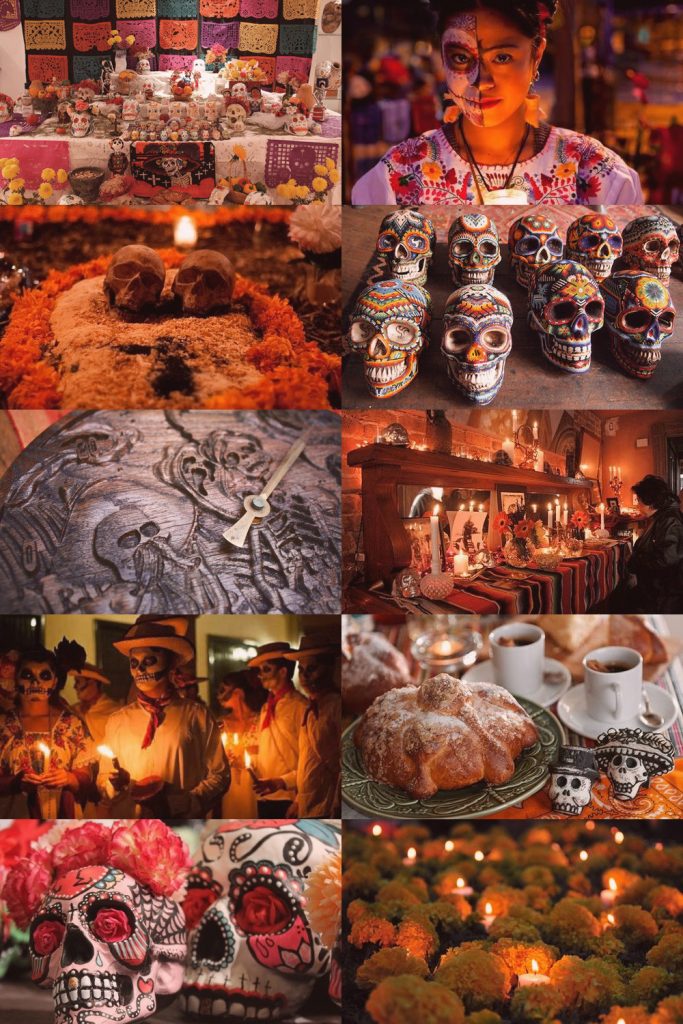 Mexican tradition believes that on the eve of Día de Muertos the souls of the departed come back to visit, staying by their loved ones till the sun rises. ¡Feliz Día de Los Muertos! ❤️💀❤️ It is never too late to remember those who are no longer with us…

I’m glad this tradition arrives in France now, maybe partially because of Disney’s movie Coco , anyway it is a good thing that the tradition meant to honor death and celebrate life is getting some focus and a growing number of fans. And  people are strating to make a difference between pagan and meanto scare releasing all kind of fears and lunatics Halloween and so very profoundly religious dia de los muertos . In 2008, the tradition was inscribed in the Representative List of the Intangible Cultural Heritage of Humanity by UNESCO.

Prior to Spanish colonization and forced enslavement  of the 16th century, the celebration took place at the beginning of summer. Gradually, it was associated with October 31, November 1, and November 2 to coincide with the Western Christian triduum of Allhallowtide: All Saints’ Eve, All Saints’ Day. It lasted a whole month in honor to goddess Mictecacihuatl. Now la Catrina aka lady of the deads.

Occurring within the dates of October 31st-November 2nd and as the name suggests it’s a holiday in which the dead are remembered, doing so by visiting cemeteries and leaving offerings of items which the deceased may have enjoyed in life and are intended to bring their soul back to the world to visit with their loved ones.

Halloween is not the day of Day of the Dead or aka Dia de los Muertos.

Dia de los Muertos is not the Mexican version of Halloween. 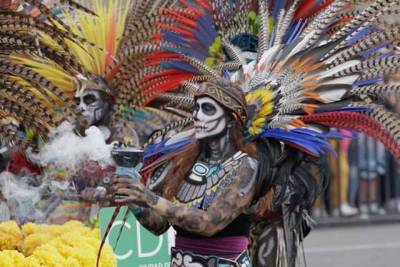 people go visit their loved ones’ graves and decorate them with beautiful bright flowers. They spend time there eating and talking as if they had never left. It’s a beautiful thing to do. Those who do not get to visit build altars in their homes and do the same. Pictures of  deceased family members are placed and exposed and food like the pan de muertos is cooked and left to them. 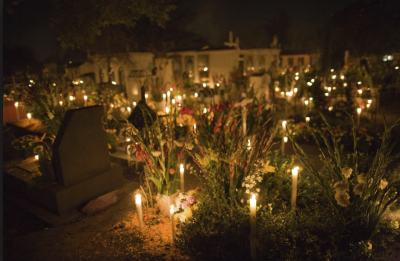 At the local graveyard  the pungent aroma of thousands of marigolds, homemade memorials and candles everywhere signal the evening hours of Dia De Los Muertos. The shadows of those who come to quietly remember loved ones move through the graveyard. Voices and occasionally laughter ring out in the night air.

A celebration of death and life…

Decorative sugar skulls line the the front of the colorful, four-tiered altar. Cempasúchiles in bloom are scattered between painted skeletons, unlit candles and plates of food resting on pink papel picado, an intricately designed tissue paper. 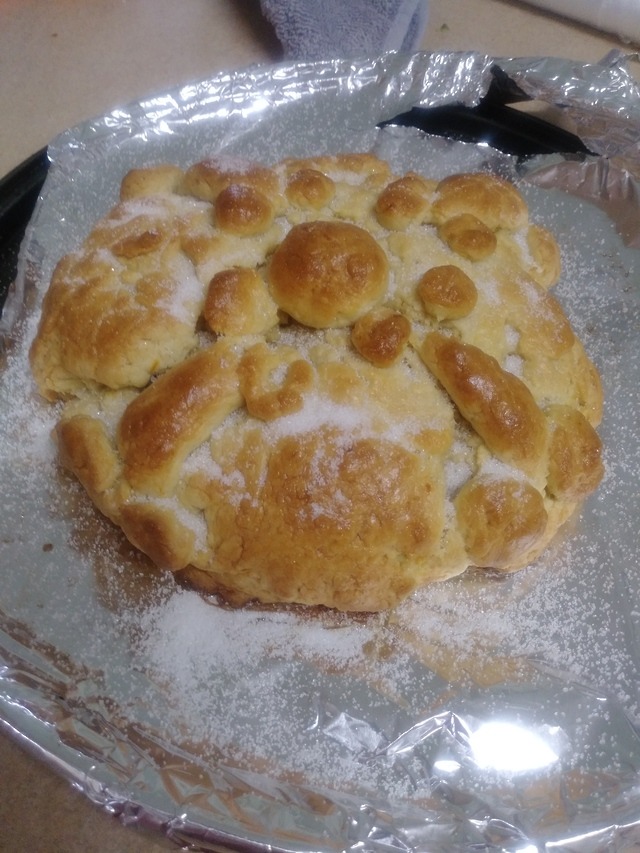 Three banners hang above the display. In the center, La Catrina, the female skeletal figure that has become an icon for the occasion, is painted with a declaration: Día De Muertos. Day of the Dead. 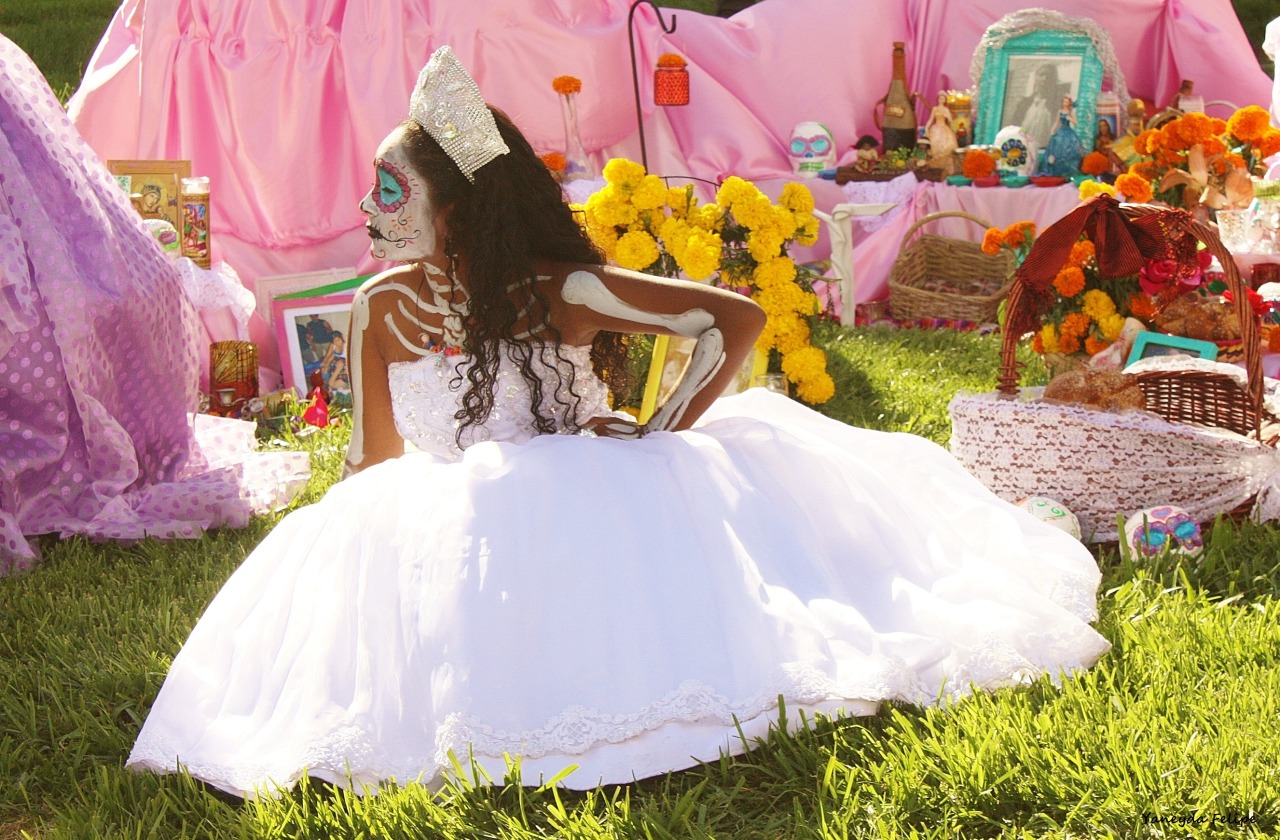 Another important figure, if not the most important in this lovely celebration is “La Catrina”. The Catrina, that 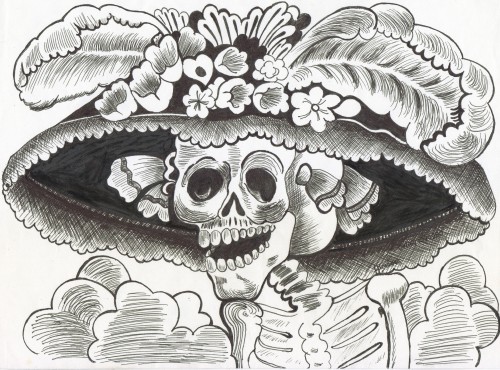 originally was the “Calavera Garbancera” fired crowned by Jose Guadalupe Posadas, more than 100 years ago, in a metal engraving to criticize the chickpeas, who were of indegenous origin, but pretended to be European. Originally, she was not dressed, only wearing a hat, and the artist interpreted her as a criticism of the poverty Mexicans had to live through at the time. She was a mockery of the upper class of Porfiriato, and at themselves denying their origins , a mexican friend of mine artist Raul Velasco  Ugalde told me .

Observing “The Catrina”  ‘s style we can see  that the image  with her chapeau en attende is related to French and European styles of the early 20th century. She is offered as a satirical portrait of those Mexican natives who, Posada felt, were aspiring to adopt French aristocratic traditions in the pre-revolutionary era. She in particular has become an icon of the Mexican Día de los Muertos. The reason of the skeleton is because people were starving. They were almost dead but they were trying to look like the upper class because of the discrimination.

While the original work by Posada introduced the character, the popularity of La Calavera Catrina as well as her name is derived from a work by artist Diego Rivera in his 1948 work Sueño de una tarde dominical en la Alameda Central (Dream of a Sunday afternoon along Central Alameda).

To everyone who celebrates it.

May your memories be warm, and your time with your loved ones, whether here beside you now or simply in those memories be joyous and satisfying.

To live in the hearts we leave behind is not to die. Thomas Campbell

Indigenous festivity dedicated to the dead”. UNESCO. Archived from the original on October 11, 2014. Retrieved October 31, 2014.