The Enslavement Of Black People by the Arabs

Often much less evoked and taught than the transatlantic trade, it was much more important in quantity and duration. 17 million Africans are victims, as well as 3 million Europeans, of the Arab-Muslim trade.

While the transatlantic trade organized by the Europeans between the 16th and the 19th century is always taught and talked about, shown, , the trans-Saharan one orchestrated by the Arab-Muslim world for over 13 centuries is a relatively unknown subject, which is still taboo on the African continent despite its significant impact on the black population. And their ignorance in making their religion or the way of life of those who first, before everyone else, enslaved them.

The Arab black slave trade began in 652 AD, when General Abdullah bin Sayd imposed on Khalidurat, ruler of the Kingdom of Nubia – a territory between southern Egypt and northern Sudan. today – the delivery of more than 300 slaves a year through the establishment of a treaty called bakht.

From now on, the black slave trade continued to grow, gaining a large share of Africa. It will eventually spread from the west coast of the continent to the Indian Ocean, through the Red Sea.

Although it is difficult to give precise figures as to the number of victims of this sinister traffic, several researchers like Salah Trabelsi, Tidiane N’Diaye or Malek Chebel, relying on documents of time as well as more recent works historians like Ralph Austen and Paul Bairoch, estimate that the number of black slaves involved in the Arab-Muslim slave trade – also known as the trans-Saharan and Eastern slave trade – would be around  15 and 17 million.

Not to mention the collateral casualties killed in the fights, during the kidnappings, and the captives wounded or deemed too weak to be deported who were executed on the spot.

According to Tidiane N’Diaye – an Franco-Senegalese anthropologist and writer , specialist of African civilizations and author of  the book “The veiled genocide” which deals with the trans-Saharan and Eastern slave trade – for one deported person, three or four others were killed.

The proportion of black slaves deported as part of the Arab-Muslim trade would be much higher than that of the transatlantic trade organized by Europeans between the 16th and the 19th century, in the context of which historians believe that between 9 and 11 million people were enslaved to the Americas.
From the beginning of the Arab-Muslim conquest and as the territories under the control of the Islamic Caliphate troops expanded, slavery was a real pillar that structured the whole of society and was of paramount economic importance.
Although they were much more likely to be enslaved during a period spanning for over 13 centuries, black people were not the only ones to be enslaved by Muslims. it is estimated that more than one million Europeans were captured by Barbary corsairs who roamed the Mediterranean Sea between the 16th and the 19th century. Long before them, Slavs were also enslaved and mass-shipped to Muslim territories.

However, the spatio-temporal amplitude and the number of victims generated by the trans-Saharan and Eastern slave trade seems to be out of proportion. Moreover, the enslavement of black populations will be legitimized by the emergence of the first racial theories from respected Muslim scholars whose thinking was largely authoritative as Ibn Khaldoun (1332-1406).

The latter will put forward the lower degree of humanity of the black peoples, going so far as to describe them as cannibals and declaring that “the Negro nations are generally submissive to slavery because they have attributes close  to those of the most stupid animals. “
A way of justifying the slavery of the Blacks which will allow, in some cases, to circumvent the prohibition to enslave other Muslims stipulated by the Caliph Omar (581- 644) – some black slaves captured by the Arabs were sometimes Muslims themselves .

A form of barely veiled genocide

After being captured, blacks in West Africa then embarked on a long journey through the Sahara Desert to reach the slave markets of the Maghreb and the Nile Basin.
Through horrible inhuman  conditions, the crossing of the arid expanses of the Sahara lasted between two and three months, causing the death of 20 to 30% of the captives. But millions of blacks raided south of the Nile and the Horn of Africa were also deported to India and the Arabian Peninsula through the Red Sea and the Indian Ocean.
The eastern coast of Africa was indeed one of the favorite hunting grounds of Arab slavers who set up several counters, including that of Zanzibar.

Moreover, when they arrived at their destination, most of the males were castrated in “specialized workshops” – a terrible mutilation which caused a terrible mortality among the captives. According to Tidiane N’diaye, it would even be a real genocide unable to give birth, the displaced populations were destined to die. This is why there are now very few descendants of black slaves in the societies of the Arab world, unlike Brazil, the United States or of the Caribbean islands which would shelter about 70 million descendants of former African slaves against barely 1 million in the Arab countries. “The fate that was in fact reserved for African captives now appears with hindsight, as a kind of Ethnic extinction at the end, but programmed by massive castrations. We know today that they have all but disappeared, despite the enormous masses of Africans deported to Arab-Muslim countries, “explains Tidiane N’Diaye.

A phenomenon that continues today According to the researcher, there would still be tens of millions of enslaved people in the world today, including a large part in the Arab-Muslim world where slavery would indeed persist in some countries including Mauritania (where slavery was officially abolished in 1980), Lebanon, Libya, Saudi Arabia (where slavery was legal until 1962) and the Gulf countries. ” What is happening in Libya today with African slave markets is simply a kind of continuity in the treatment that Arab Muslims reserved for Africans. “African students living in the Maghreb are often treated in a rather despicable way. African maids are confiscated their passports in Lebanon or elsewhere, “said Tidiane N’Diaye. 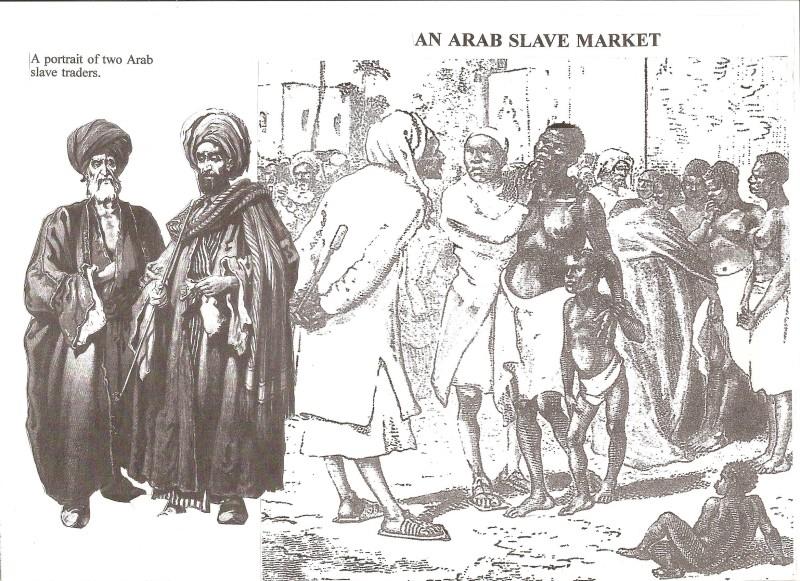 A phenomenon still going on  today
Although some courageous African intellectuals and historians have already taken an interest in this little-known chapter of the Black Continent, the trans-Saharan and Eastern slave trade is still a taboo subject in many African societies.Tidiane N’Diaye even speaks of “voluntary amnesia of the black elite on the issue, “explaining that” many researchers still struggle to move from an affective memory view of this story – obviously for issues of religious solidarity – to a distanced and scientific approach of a a story that deals only with proven facts.
“He nevertheless affirms the necessity of doing a work of memory” so that the horrors of the past never fall into oblivion.
“” If there were in the West all these abolitionist movements for to end the transatlantic trade and, later, against trans-Saharan and Eastern crime, there is no trace of in the Arab-Muslim world, and no repentance to this day. “
According to the researcher, there would still be tens of millions of enslaved people in the world today, including a large part in the Arab-Muslim world where slavery would indeed persist in some countries including Mauritania (where slavery was officially abolished in 1980), Lebanon, Libya, Saudi Arabia (where slavery was legal until 1962) and the Gulf countries. ” What is happening in Libya today with African slave markets is simply a kind of continuity in the treatment that Arab Muslims reserved for Africans.
“African students living in the Maghreb are often treated in a rather despicable way. African maids are confiscated their passports in Lebanon or elsewhere, “said Tidiane N’Diaye.
“There are no degrees in horror, no monopoly of suffering; but the page should be written, “concludes the anthropologist.
If you enjoyed this article, share it with your friends and leave a comment to give us your opinion.