In the immediate vicinity of the Franco-Italian border, a Belle Epoque villa sunk among Palm trees and subtropical vegetation, facing the sea.

In 1882, Count Louis Alexandre Foucher Careil (Ferdinand de Lesseps’ relative), member of the Senate, France’s ambassador to Austria-Hungary, buys part of these plots, either side of the railroad to build his future ownership and raise a holiday house

The Maria Serena villa is built in 1886 on plans by architect Charles Garnier. This Belle Epoque construction presents its pinnacle-lookout in a green setting facing the sea. It is designed and built in the same style, somewhat ostentatious, as two other villas in Bordighera built by this architect. His style is therefore in line with the construction of the Riviera of the last thirty years of the nineteenth century.

In 1922 the property was purchased by Henry Hans Konig, British businessman. At the outbreak of war, Konig returns to England. During the war, Maria Serena was the scene of fierce fighting and the park, like the villa, will bear the traces. After liberation, Henry Konig offers the legacy of his property to his head gardener, who accepts only the part located above the-track, at the current location of Mirazur. The part below the railway, including the villa, was bequeathed to the city of Menton in 1947

Since then, it is the setting for the reception of famous guests, Queen Elizabeth of Belgium, Queen Astrid, President René Coty …. As well as dignitaries of Arts and Letters.

Might be more appropriate to call it Palm Grove, is a hymn to the disheveled verticality. From the entry, the sight is approached by slender forms that seem to articulate each other, since the two planes are separated by a steep slope. The lower level is occupied by a set of palm trees, among which one recognizes Caryota urens, Phoenix canariensis, Washingtonia, Chamoerops humilis, mingled with beautiful Cycas.

The higher plane, topped by a row of cypress trees, has the appearance of a dark vegetable wall. And in a wide range of feather-like leaves of a large green bird, the powerful wreath of Strlitzia augusta ensures continuity between the two plans.

The basin, with its Dragon fountain brings a little freshness in this mineral environment. In the middle of a circle of Lily that serves as a backdrop, the dragon tree Dracaena draco, fabulous being, between giant octopus and diabolical harpy, stretches his multiple arms with hairy endings, while his paunchy stipe bleeding and scarred lets exude thick drops of ruddy juice!

In the north, bordering the railway, a strip passing behind the villa mixes Mediterranean trees, pines, carob trees, cypress trees and exotic species – palm Chorisia speciosa, jacaranda, Ficus elastica. The settings will simplify and homogenize gradually from east to west, to finally end with a double row of cypresses

The ” last come ” tree is the Parajubaea cocoides which comes right from Equador!

On the shores of the Mediterranean, the Belle Epoque has still villas and gardens, witnesses of the grandeur of the Riviera. 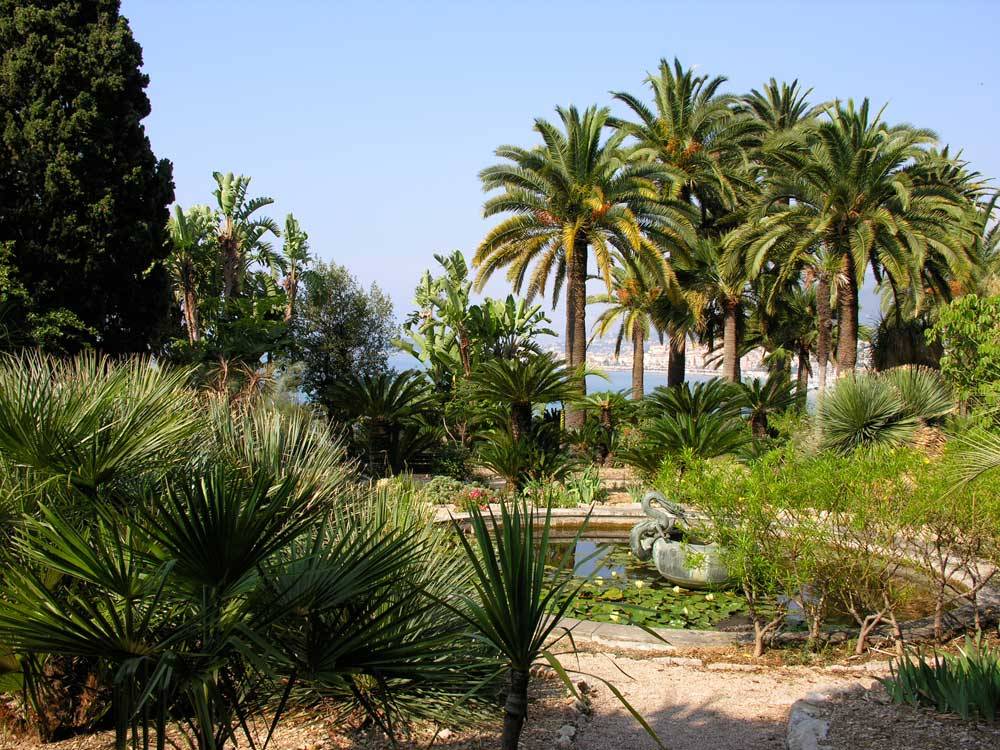