Hello from Sweden and the beautiful city of Uppsala. Words cannot describe how lucky I am to be able to visit my Swedish family at heart this December! Thank you very much for having me.

Before leaving, we review. Who reviews the basics of  Swedish?

Welcome to Uppsala: the cultural reference of Sweden with a surprising past whose monuments still testify to the greatness and is still the University city par excellence. Its University, founded in 1477, the first in Scandinavia, has always been linked to the Church, of which Uppsala is still the Swedish archbishopric. First Catholic, then Protestant, the Swedish Church is a State Church as in all Scandinavian countries, each time the Head of State is the Head of the Church, in the case which interests us, it it is therefore about the King of Sweden: Carl Gustaf Folke Hubertus Bernadotte direct descendant of the Napoleonic general Jean-Baptiste Bernadotte who by a happy coincidence found himself propelled King of Sweden in 1818 and husband of the beautiful Désirée Clary who was in her time very desired by Bonaparte before he fell madly in love with Joséphine de Beauharnais. However Science has taken precedence over religion, and the University of Uppsala has within its walls many scientists like Linnaeus or Celsius, the creator of the Celsius temperature call.

Nearby is the town of Gamla Uppsala, place of Viking beliefs and archeology where many Swedish kings were buried.

The best-preserved historic buildings are found in the western part of the city.
The Gothic Uppsala Cathedral, the Domkyrka (Lord’s Church) is the largest in all of Scandinavia. Its towers reach 118 meters. In its interior several personalities were buried, among them, Gustave I Vasa, Carl Linné and the philosopher Emmanuel Swedenborg. The building dates from the 13th century but it was finished in 1435. The great fire of 1702 damaged the wing that was restored. The two facade towers date from the 19th century.

The University is a city in itself. Founded in 1477 counted with several faculty buildings and numerous parks such as the Carolina parken, the Observatory Park, or the Sturemonumentet Park. A little further south the Stadsskogen is the main wood of the city, literally its name means Wood in town. However, very close to the west of the city several woods make the link between the city and nature. Sweden like Finland and Norway are green and wooded countries.

The main building of the university for centuries was the Gustavianum, opposite the cathedral. Built in 1625, now is the headquarters of the Museum of Nordic Antiquities, the Victoria Museum (dedicated to Egyptian antiquities and cultural funds from the University of Uppsala..

In the University Park, after crossing the street in front of the Gustavium is the University Hall building, dating from the end of the 19th century and built in Neo Renaissance style. Other important buildings in the University are the Uppsala Castle (Uppsala Slott); the Linneanum; the English Park Campus; Carolina Rediviva, the University bookstore; the Dag Hammarskjöld Foundation, Vasaborgen Uppsala Slott (The Vasa Castle in Uppsala); the University Observatory and Cemetery.

The anatomical theater at Uppsala University was used as a demonstration center for teaching medicine. Until 1766, dissections took place in front of medical students and a paying public, mainly on animals but sometimes on executed criminals.

The gardens had two great moments, one under Olof Rudbeck the elder and the other under Carl von Linné. Today, Carl summer residence von Linnaeus, with its garden and park, is part of the heritage of linnéien Uppsala University.

My friend  Ulf is such a pranskter , he wants to cook me hot dogs. Yeah right make fun of the vegan lady

Here is the dinner the traditional festive meal before Christmas 🎄 in Sweden 🇸🇪. The julbord. Julbord is the term for a Scandinavian feast or banquet in the days before Christmas in December and partly November where it is served traditional Christmas food and alcoholic drinks, often in the form of a buffet! You can go to these buffets during Christmas! But in some cases, they could be expensive! So you can have your own julbord party! Enjoy a Christmas potluck with lots of safransbullar and pepparkakor, glogg, julmust, and homemade food! Anyway, it’s a great birthday meal in advance for me.🌠 Jag skar dig Landerberg gang. 😘💞💕

Located 900 kilometers from Uppsala 🇸🇪 and an hour and a half by plane ((5pm by train if you prefer from Stockholm) little surprise as we like. The town of Kiruna in Swedish Lapland.

The Kiruna mine is the most important iron deposit in the world. According to the operator’s estimates, it would extend over more than four kilometers in length and one and a half kilometers in depth.

A timeless city and atmosphere with magnificent landscapes.

Despite all a twinge in the heart because this city is in the midst of moving, mining (sigh) requires a lot of change. Is nature really preserved? I do not know. On the other hand, what an honor and what a joy to have discovered the Sami culture

The Sami territory, which they themselves call Sápmi (part of which is also known as “Lapland”), covers the arctic regions of Sweden, Norway, Finland and Russia. The Sami are an indigenous people, reindeer herders, whose language, culture and traditions differ from those of the surrounding societies. Over the centuries and years they have been under pressure to assimilate and it will not be until the 1990s that their rights are better recognized and improved.

For the Sami, indigenous people of the Nordic countries, Beaivi is the name of the sun goddess associated with motherhood, plant fertility and reindeer. At the winter solstice, hot butter (a symbol of the sun) was coated on the door jambs in sacrifice to Beaivi so that she could gain strength and fly higher and higher in the sky. Beaivi was often shown accompanied by her daughter in a reindeer enclosure and, together, they returned the green and the fertility to the ground. »

After this authentic moment, we left for another great tourist moment. The ICE hotel. It is located in Jukkasjärvi on the banks of the Torne (border river which separates Sweden from Finland), not far from Kiruna. It opened in the 90s, designed by Yngve Bergqvist a miner determined to take his destiny in hand and change his life. Successful bet with this very beautiful hotel with world renown. His particuliarity ? Mix comfort and art, which means that the hotel is never aesthetically the same from one year to the next. This is why the hotel is only open from December to mid-April, on the one hand because of the climatic conditions (spring and summer) but also so that the artists have time to work on new creations.

Rest assured I did not sing let it go, let it goooooooooooo, dont but I was able to discover this hotel whose external aspect made me a little disappointed and with a guided tour much too fast for my taste, although we could visit the rooms as we wish. Then lunch and my first flika before going to see the reindeer and then taking the plane towards the South.

After this magical day, we headed  to the Swedish capital to spend the night. Little stroll along the way to admire the Christmas windows. 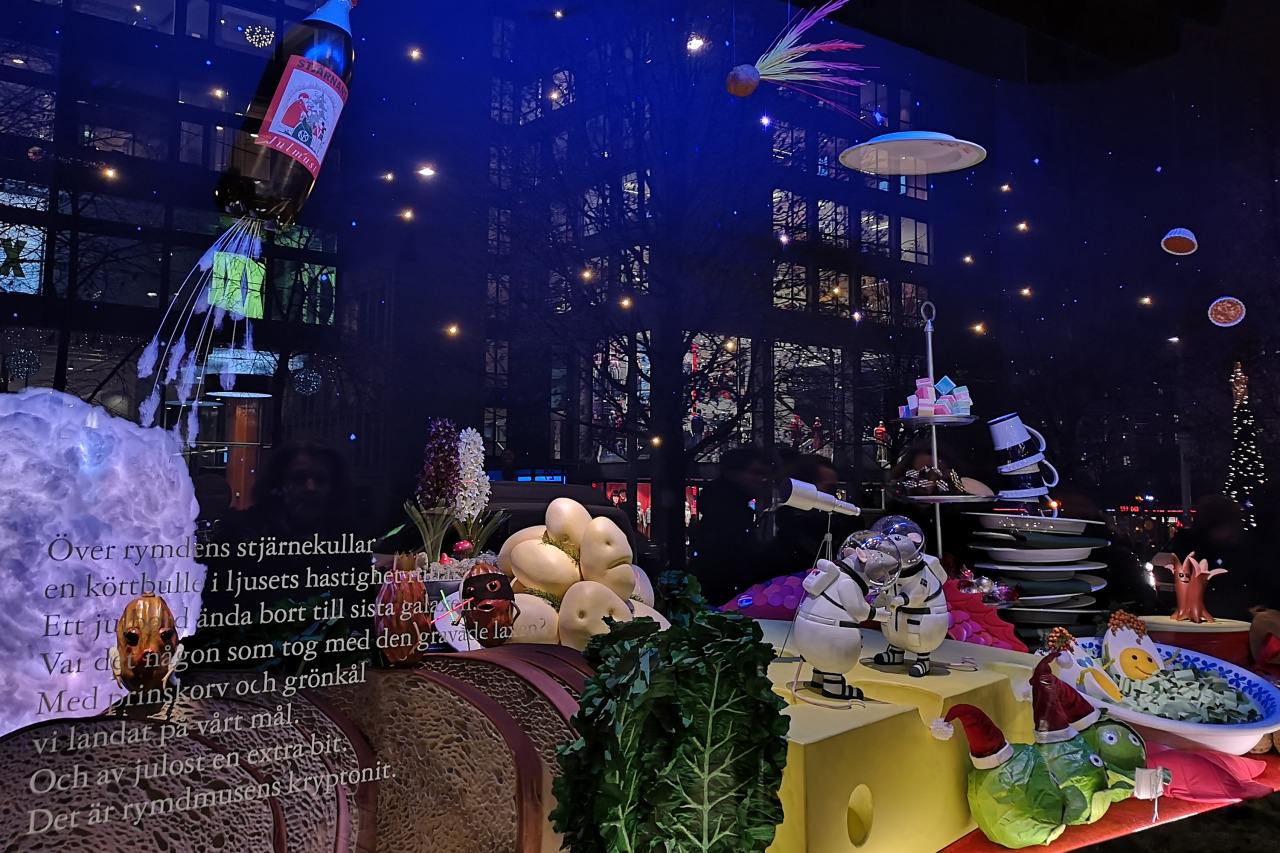 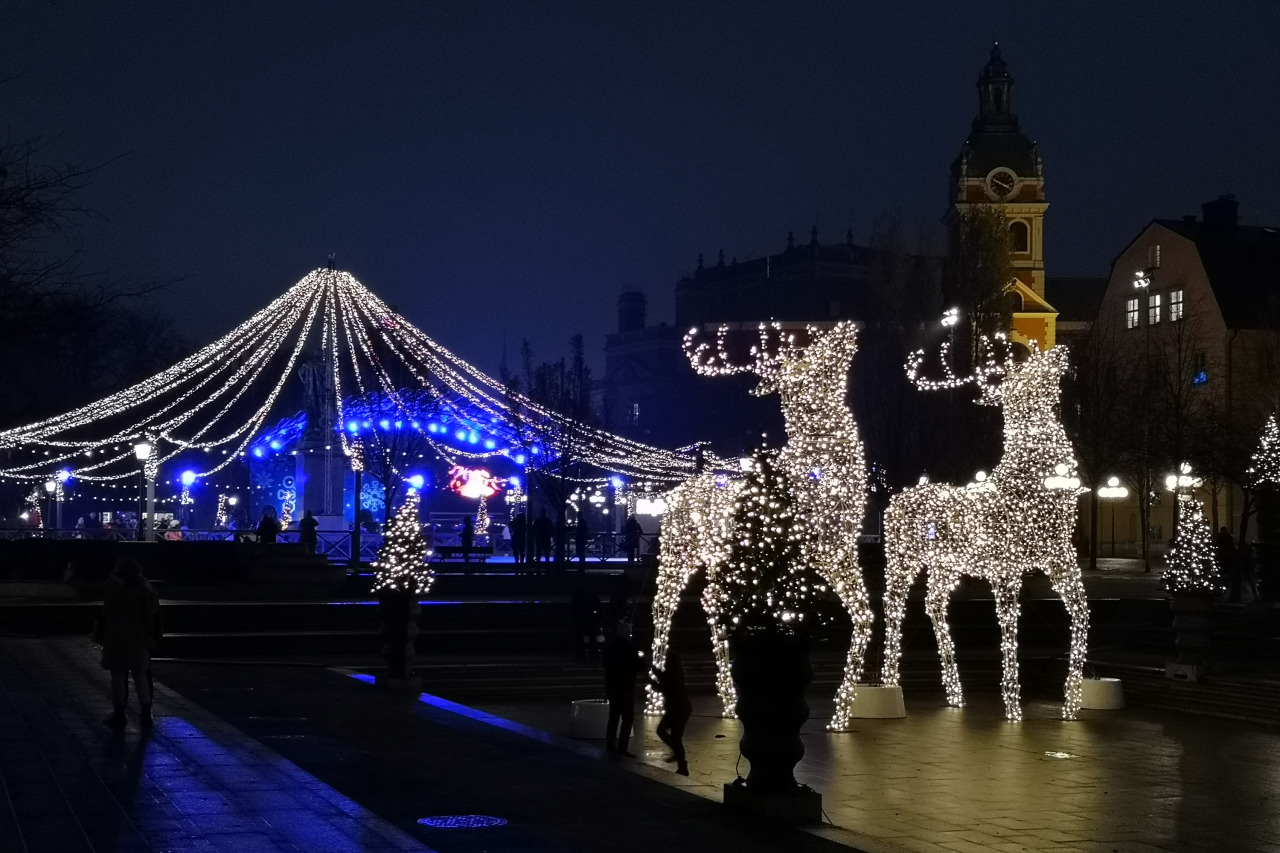 Stockholm is the largest city in Scandinavia, but still nature is very present and certain areas of the Swedish capital have the air of a village. It is a beautiful city that harmoniously mixes heritage and modernity.

If you are visiting Stockholm for the first time, you will be surprised by the omnipresence of water. Indeed, the latter has 14 islands and numerous bridges. Ferries are a good form of transportation, but most locals prefer to get around on foot. Due to the cool winds from the Baltic Sea and the changing weather, it is advisable to wear several layers when exploring Stockholm.

Founded by Birger Jarl, the city is contained in 1252 on the small island of Gamla Stan (Old Town) the first building – a fort – controls maritime traffic between the Baltic Sea and Lake Mälaren.
Magnus Ladulås made Stockholm prosper thanks to its commercial relations with Lübeck. In 1289, it was already the largest city in Sweden. It has been the capital of Sweden since 1419 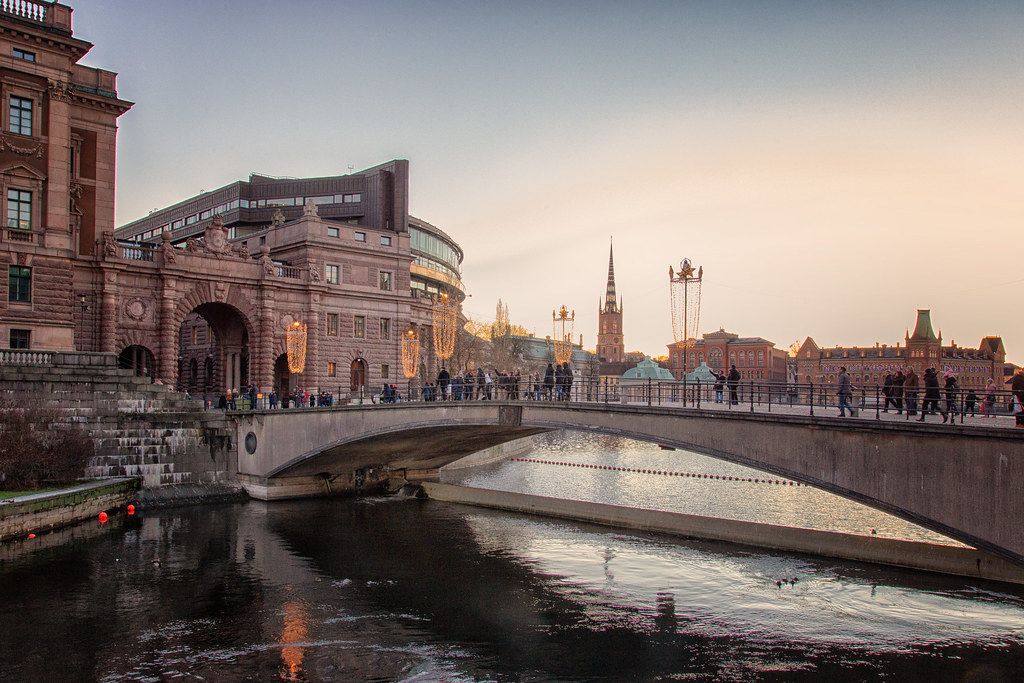 Located in the northern part of the old town it was erected in 1754 by Nicodemus Ticino the young who had designed it as a Roman palace. The more than six hundred rooms are distributed over seven floors, the ceremonial rooms overlooking the city and the smaller living rooms on the inner courtyard.

The Royal Palace is also the workplace of the royal couple and of persons attached to the Royal Court of Sweden. With its multiple functions of royal residence, workplace and cultural and historical monument accessible to the public all year round, it stands out from other royal palaces in Europe. 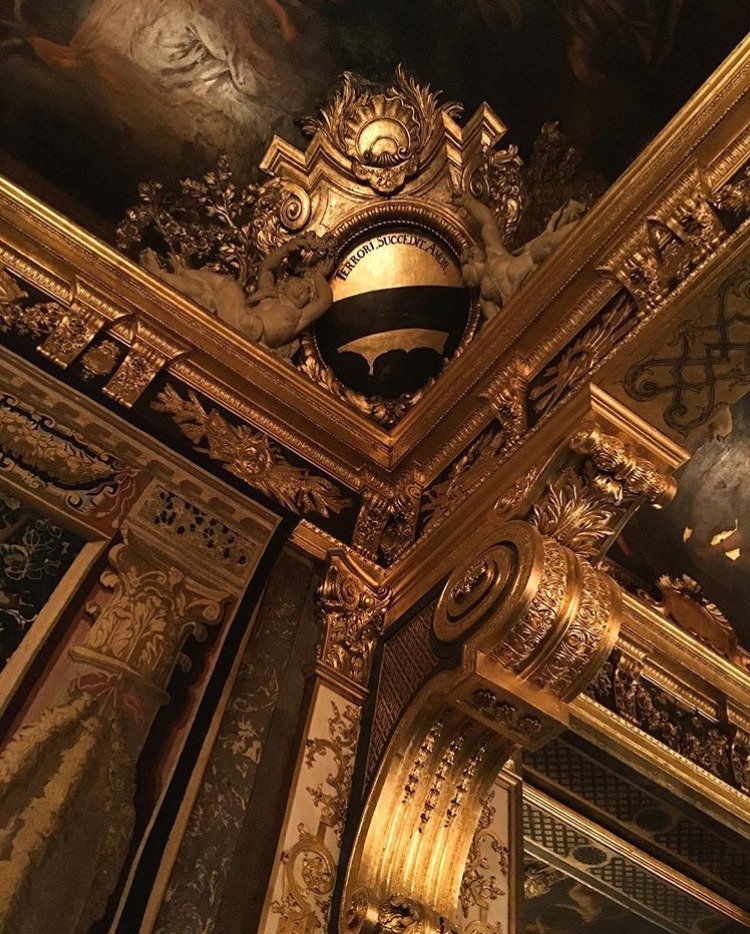 The mythical Griffon, symbol of the no less mythical King Minos of Crete, protector of the arms of Carl of Sweden, heraldic emblem he had chosen when he was Duke of Sodermanland.

skulle du kunna hjälpa mig? – could you help me?

var ligger närmaste tunnelbana? – where is the nearest subway station?

vart går den här bussen? – where does this bus go to?

varifrån går buss nummer … ? – from where does bus number … go?

hur kommer man till det kungliga slottet? – how to you get to the royal castle?

Climate and weather in Uppsala

The climate is continental continental, with mild summers and cold winters (-2.7 ° C average in January). But although its latitude is very high the weather is not as bad as in Canada for example. In summer during the solstice there are 18 hours of full sun and the true night is very short. Summers can be very hot like that of 2018 with almost 30 ° C during June, July and August.

In winter there is almost sure snow after Christmas until March.

How to get there.

As we said, Uppsala is very well served by train, bus and car. There are only 70 kilometers to Stockholm, only 40 minutes by train.

But the main airport in Stockholm, in fact it is closer to Uppsala than to the capital, only 17 minutes. So you can come directly to Uppsala without going through the capital.

Uppsala Central Station is a hub between the southern regions of Arlanda, Stockholm and Linköping, the north-west (Gävle, Sundsvall and Östersund) and the north towards Kiruna and Narvik in Norway.